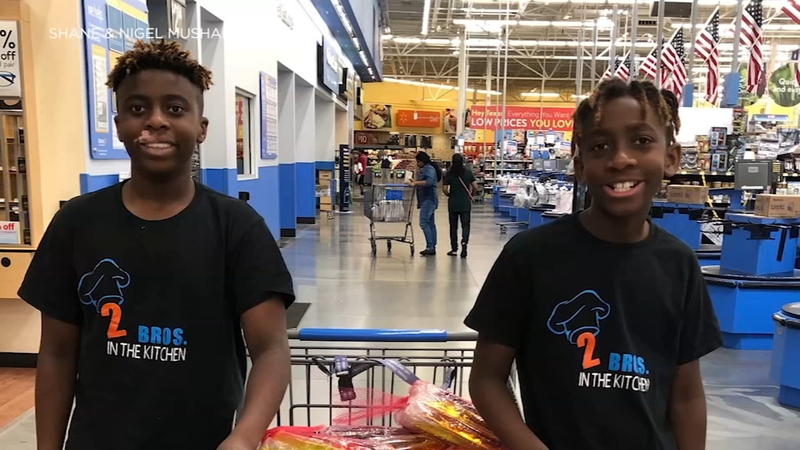 MISSOURI CITY, Texas (KTRK) -- Brothers Shane and Nigel Mushambi may only be in middle school, but they're baking up sweet success with their own business.

Shane, 13, and Nigel, 12, are the creative minds behind Two Bros. in the Kitchen. The brothers first started their business after winning a local baking competition three years in a row. For every cake or cupcake they sell, they donate part of the proceeds to charity.

"We like giving back to the community because the community has given a lot to us," said Shane. "We give to Fort Bend Cares and the JB Dondolo Foundation, which is trying to rebuild a hospital in Africa."

The brothers have also donated hundreds of meals to the homeless.

But baking isn't their only talent. Shane and Nigel both love math and science and use those subjects in the kitchen.

"I like to bake because it's a mix of art and a mix of science," said Shane. "You need to know how acids react to bases."

Although Shane is technically an eighth grader, he's taking college-level math and engineering courses at Houston Community College. Nigel, who's in seventh grade, is taking a pre-calculus course in the fall.

In addition to schoolwork and their business, the brothers also love to write. They just published their first book, Beyond the Kitchen: How to Cook Up Success with Life's Mistakes, to inspire other young people to go for their dreams.

"It's about our failures that we've made in the kitchen and how we learned from them," said Nigel. "We just released our book last week."

"It teaches how you don't have to be perfect to succeed," said Shane. "It's okay to fail as long as you learn from it."