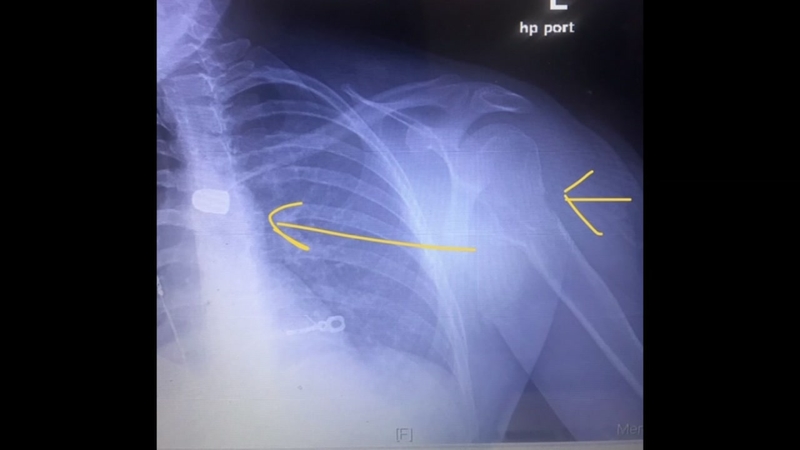 x-ray of victim who was shot in Katy area, shows bullet lodged near heart

HOUSTON, Texas (KTRK) -- A Katy man is back in jail, accused of shooting a second driver while on the road.

Before he was re-arrested Thursday, D'Agostino had posted $75,000 bond and was a free man for 48 hours.

"The hardest thing I ever had to do was tell her that he was out, and knowing what kind of feelings she was going to experience when I told her that," said the husband of one of D'Agostino's alleged victims.

His wife, who says she was shot in July by D'Agostino, sat down with Eyewitness News for the first time since that shooting.

The 29-year-old is charged with shooting the Katy mother on July 10 while she drove to a car wash on S. Mason Road.

Attorney for man accused of shooting two women in their cars says "This is a very sad situation."

The bullet went straight through her arm, lodging millimeters from her heart.

While behind bars, investigators with the Harris County Sheriff's Office said he confessed to the July shooting and five more similar shootings.

On Tuesday, after more than a month behind bars for the July arrest, D'Agostino was able to post bond and walk out.

"It was the most frightening 48 hours of our lives. I've been hiding my family, we've taken every precaution that we could."

The family installed cameras, had a 24-hour security presence in their home and even slept at different locations all out of a looming sense that D'Agostino would try to harm them.

They returned back to their home after investigators re-arrested D'Agostino Thursday for a second shooting case.

A woman was hit in the arm while leaving a Shell gas station off the Katy Freeway near Grand Parkway back in March.

Investigators requested a high bond after the second arrest, saying in court records the "defendant presents a continuing threat to the community and in particular, to female motorists in Katy."

They say he has a dim view of women and cited his "Facebook posts where he rants and rambles on about female motorists and how incompetent they are and that their sole purpose is to give birth to male children."

"It's unspeakable, unspeakable. Evil and very scary. It's worst case scenario, as far as danger to the entire community," said the July victim's husband.

"The family is just as sorry as they can be. They're wonderful people and they're very, very sorry for any problems or pain this has caused anyone," said Ken Mingledorff.