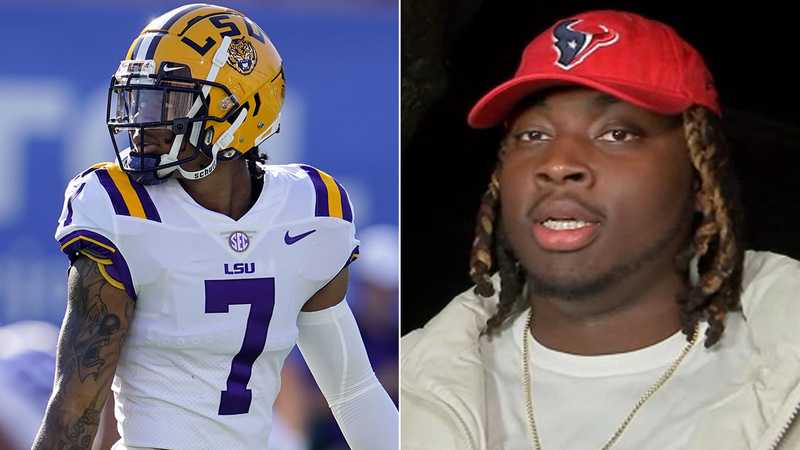 "That's a position we'll continue to look to improve," Smith said. "We can't play the type of football that we want to play until we get better at the cornerback position, I will say that."

On Thursday night, the team's former defensive coordinator got a player who should help change that when the Texans took LSU cornerback Derek Stingley Jr. with the third overall pick in the draft.

Stingley had six interceptions and broke up 15 passes as a freshman in 2019 to earn All-America honors, but has played just 10 games in the last two seasons because of injuries. He played just three games last season before having foot surgery.

Stingley said that he "feels great" now and is ready to get to work in Houston.

"Whenever I get there, I'll show them that I work hard and I don't give up until I figure something out," he said.

General manager Nick Caserio raved about Stingley's skills and believes playing in the Southeastern Conference will benefit him as he moves to the NFL.

"He's a technician," Caserio said. "He's really devoted to understanding the techniques of playing the position. So, when you look at everything in totality, we just felt like he made the most sense for our team. And I would say just organizationally there was a consensus and that's important."

Stingley, who helped LSU win a national title in 2019, said he modeled his game after Hall of Fame cornerback Champ Bailey.

"I say that just because we have (a) similar body," he said. "He's fast, he can run with just about anybody. He can also get strong with the bigger receivers and he's quick enough with the shifty guys. And I feel like I can do that, too."

SEE ALSO: If picks don't work out, 'you guys can blame me,' Caserio jokes


Later in the first round, Houston added versatile Texas A&M offensive linemen Kenyon Green with the 15th overall pick. He said he hadn't discussed exactly what position he'll play with the Texans, but Caserio said he sees him more as a guard than a tackle.

"Wherever they need me at I'm going to go out there and play it," he said.

The Texans had the 13th pick from Cleveland as part of the Deshaun Watson trade, but shipped it to Philadelphia in exchange for the 15th pick and three lower-round selections.

Caserio said the Texans had the chance to trade further down after dropping to the 15th pick, but decided that they didn't want to miss the talent that was still on the board at 15.

Green earned All-America honors in 2020 and 2021 after getting freshman All-America honors in 2019. He started at both guard spots and both tackle spots in 2021. The 6-foot-4, 323-pound Green was the only player in the Bowl Subdivision to log 80 plays or more at four different offensive line positions last season and helped the Aggies average six yards a play.

Green started every game in his three seasons with the Aggies and played all five positions on the offensive line.

"He is one of the most unselfish players I have ever been around," Texas A&M coach Jimbo Fisher said. "He worked hard on his technique and is always trying to get better. When we lost four offensive linemen from the 2020 squad, Kenyon stepped forward in a leadership role and has always had a great attitude. For him, being a part of a winning team comes way before any individual accomplishments."

Stingley is the first cornerback Houston has taken in the first round since selecting Kevin Johnson 16th in 2015.

It's the first time since 2019 that the Texans have had picks in the first round. Houston didn't have a first-rounder the last two drafts after sending those selections to Miami in the 2019 trade that brought left tackle Laremy Tunsil to Houston.

It is the second time in franchise history and the first since 2004 they've had two first-round picks.