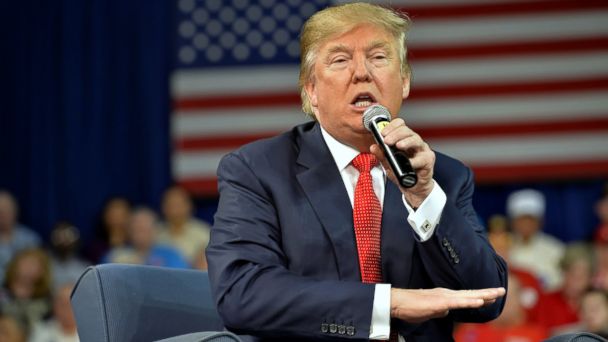 If you're looking for the "greatest hits" of Donald Trump's presidential campaign, look no further: The Republican front-runner's first television ad highlights the core positions that have thrust the real estate mogul's unconventional 2016 bid into the spotlight.

The new 30-second spot unveiled this morning underscores his position to temporarily ban Muslims from entering the United States, as well as his repeated calls to build a wall along the southern border to stop undocumented immigration.

"In terms of its content, if anyone had missed what Trump believed, this ad is telling them," explained Ken Goldstein, a professor at the University of San Francisco and an ABC News consultant. "It's not trying to tell people other stuff or introduce another face of Donald Trump...but it's trying to introduce those people who still haven't heard his messages amplified over the free media."

Trump told CBS' "Face the Nation" Sunday that he's "probably wasting money" with the ad. "I don't think I need the ads but I'm doing them," he said in the interview. "I almost feel guilty."

"Ordinarily politicians use ads to say things they haven't said in their speeches," said Kathleen Hall Jamieson, the director of the Annenberg Public Policy Center. "The ad is confirming things that he's said repeatedly in speeches. What he can't do in these speeches is attach the visuals."

Although the ad does contain a brief image of his main Democratic rival Hillary Clinton, the spot avoids any major criticism of Clinton or other Republican candidates.

"The politicians can pretend it's something else, but Donald Trump calls it radical Islamic terrorism," a voice reads in the ad. "That's why he's calling for a temporary shutdown of Muslims entering the United States until we can figure out what's going on. He'll quickly cut the head off ISIS and take their oil. And he'll stop illegal immigration by building a wall on our southern border that Mexico will pay for."

Republican primary voters across the country name national security and foreign policy as two of the most important issues of the 2016 election.

Jamieson says the national news coverage of the ad is more likely to make an impact than the actual ad buy itself. "He's basically getting another news cycle out of this," she said.

"It's going to link evocative visuals with a familiar message," she said. "He's showing visuals of people presumably crossing the border to his claim about building a wall. If he now continues to say, 'I'm going to build a wall,' he's already gotten all the news he's gotten. Now he's attached pictures to it."

Trump has spent very little of his own money on his campaign, although other campaigns and outside groups have spent tens of millions of dollars so far.

"The biggest story has been the dog that hasn't barked," said Goldstein. "It's Jan. 4 and this is the first time we're talking about a Trump ad."

But Goldstein said the ad may shed more light on Trump's strategy than the content of the spot.

"Sometimes we think too much. I think he sort of figured, 'It's 30 days now [until the Iowa caucuses]. I should probably air an ad,'" Goldstein said. "Let's see what ad No. 2 is. That will be a big tell on how confident they are or whether they are nervous about other people."

It's not clear whether this $4 million TV ad was paid by Trump personally or from donors. Trump had raised roughly $4 million from donors since he announced his candidacy. Campaign fundraising numbers from the last three months haven't yet been released.

Trump leads most national polls by double-digit margins but remains locked in a close battle with Ted Cruz in the crucial state of Iowa. The real estate mogul plans to drop roughly $1 million per week for the next month for television ads in the Hawkeye State.

He will also drop similar money in New Hampshire, where a victory for his campaign is critical. A Boston Herald/Franklin Pierce University poll in the Granite State in mid-December showed Trump with 26 percent support of state Republicans, compared to 12 percent Marco Rubio and Cruz.