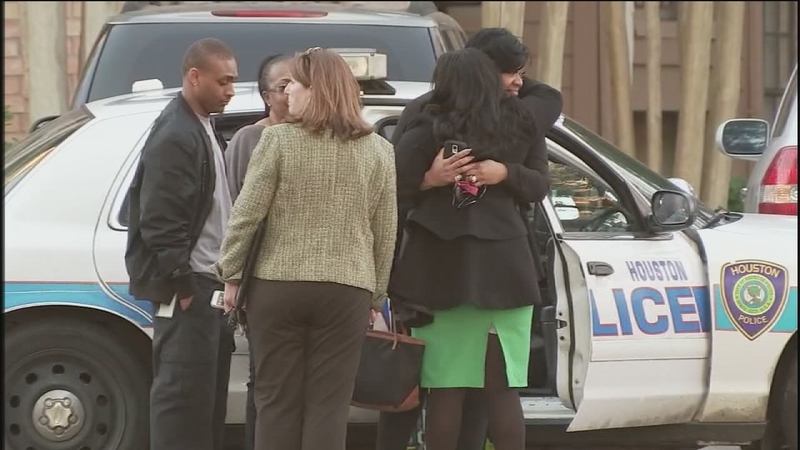 HOUSTON (KTRK) -- A woman was killed on the job Wednesday at a Medical Center-area apartment complex where she worked. Her killer then turned the gun on himself, a man with whom she had a relationship. He survived and at the moment is in critical condition.

The shooting happened at the Greenbriar Apartments near Braeswood at Greenbriar. It's home to medical residents and researchers.

"In Japan, we cant have a gun. We rarely see such kind of things," said Akihiro Hayashi, a researcher from Japan who lives at the complex.

Houston police say several people saw the man come into the complex around 3:40pm. They called police. Not long after that, they heard two gunshots.

"There were some witnesses who ran for their lives," said Officer Robert Klementich, a Houston Police Department homicide investigator.

EMS workers were directed to the clubhouse, where they found the woman's body. She had been shot once. The man was unconscious. He was taken to Ben Taub General Hospital but isn't expected to make it.

As chilling as the crime itself, was the security video that showed the man approaching the woman, firing his gun and turning the weapon on himself. Now we've learned the victim filed a harassment police report against the suspect just three hours before her death. Police say he called her about 140 times in one day.

Relatives of the victim came to the complex, including an aunt and brother. The woman who was killed was said to be a mother. Her child was not present at the shooting.

Both the victim and her killer are said to be in their 30s. She did not live at the complex.

Police say the victim and suspect started dating in 2007 had a daughter two years ago. About four months ago, he allegedly started to become unstable, harassing her and calling her from a private number. The couple separated and she got an apartment. Police say she also filed a report last month for harassment.

Asked if the woman might have thought she was safe at her workplace, a homicide investigator said, "You might think that, but this shows you always have to be on the lookout."