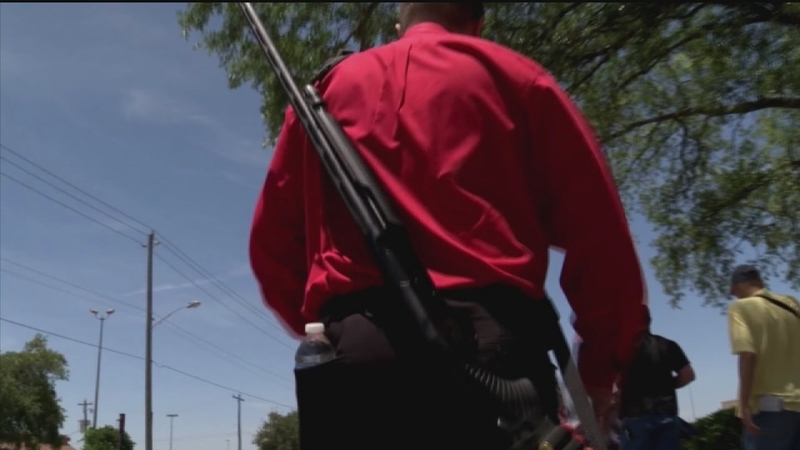 HOUSTON (KTRK) -- Some residents of Houston's Fifth Ward neighborhood say they plan to stand in protest at the main entrance to their community on Saturday when a group called Texas Open Carry is scheduled to march with their rifles in support of the right to bear arms.

Texas Open Carry has conducted similar walks in the past, including in front of Walmart, Starbucks and the Houston Galleria. The group says its marches inform the public about the second amendment, which protects the right to bear arms.

In Fifth Ward, there are those who say they're already fully aware of the law and question the group's motives.

Kathy Blueford-Daniels is president of Fifth Ward's super-neighborhood council, and is happy to show her concealed handgun license. "People here already know the law," she says. "If I ask to come to your house and you say no, I respect that. They didn't ask us, and they're not welcome. This is our house," Daniels says.

Of more concern for other neighbors, are the senior citizens who've lived their lives in Fifth Ward, some back to the segregation days, and even further back into time. Seeing people from outside the neighborhood, armed with rifles, might make them think of a different time in history.

The Houston Police Department, according to a spokesperson, is aware of the planned march. Its security plans for the event are not public, however.

Community activist Quanell X spoke with Texas Open Carry members Wednesday in a contentious meeting, asking that the group drop its plans. So far, the march appears to be on schedule.

"With everything that's going on the black community in the US, why would Open Carry Texas come into Fifth Ward this weekend if their motives are pure?" he asks, adding, "I expect there will be a large police presence out here Saturday."

We emailed and called a representative of Texas Open Carry for comment on this story. We did not receive a response.
Related topics:
fifth ward / frenchtownguns
Copyright © 2021 KTRK-TV. All Rights Reserved.
More Videos
From CNN Newsource affiliates
TOP STORIES