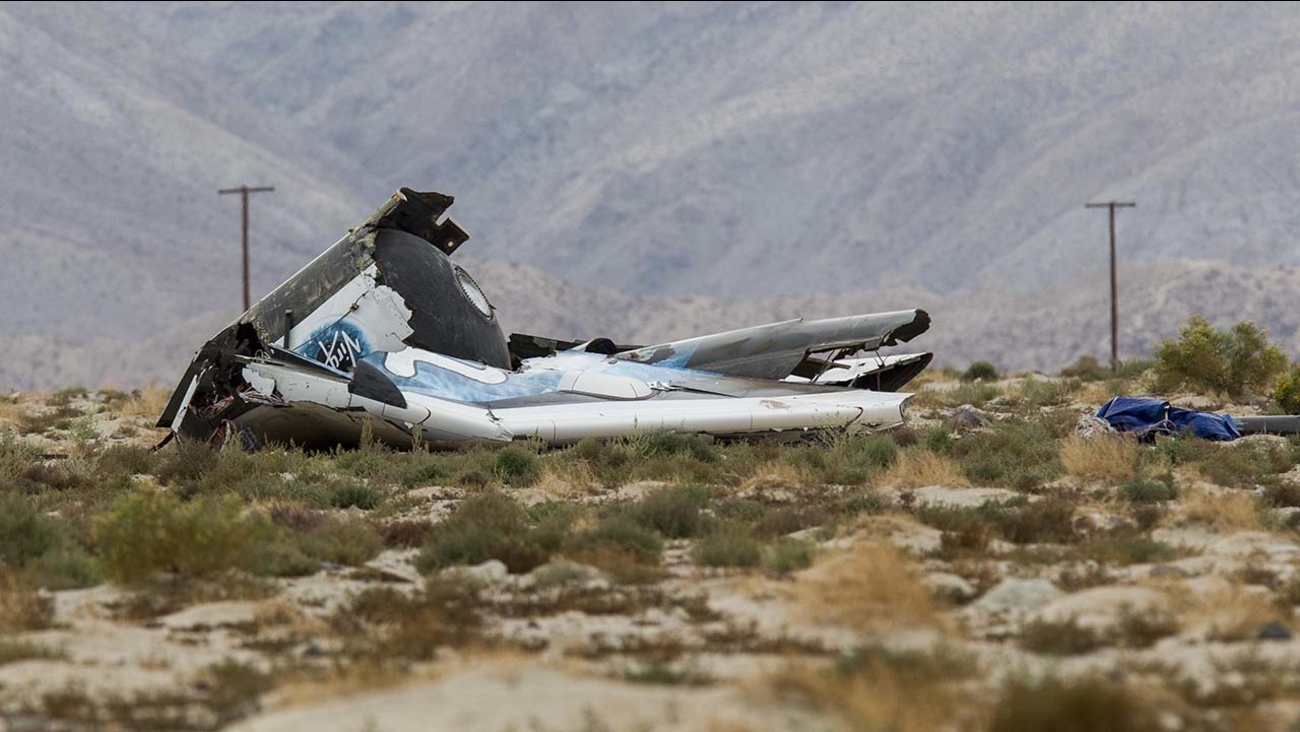 MOJAVE, CA -- Federal accident investigators arrived Saturday to begin a probe into the cause of an accident that destroyed a prototype space tourism rocket ship during a test flight, killing one pilot and injuring another.

The National Transportation Safety Board team was expected to hold an initial press conference later in the day at the Mojave Air and Space Port, where the winged spacecraft was under development.

Also expected to come to the area about 120 miles north of downtown Los Angeles was British billionaire Richard Branson, founder of Virgin Galactic, whose SpaceShipTwo blew apart after being released from a carrier aircraft Friday. It was the second fiery setback for commercial space travel in less than a week.

Branson, said it was "among the most difficult trips I have ever had to make" but that he wants to be "with the dedicated and hardworking people who are now in shock at this devastating loss."

"Space is hard - but worth it," Branson wrote. "We will persevere and move forward together."

Branson has been the front-runner in the fledgling race to give large numbers of paying civilians a suborbital ride that would let them experience weightlessness at the edge of space.

The NTSB investigators were expected to head to an area about 20 miles from the Mojave airfield where debris from the spaceship fell over a wide area of uninhabited desert.

The spacecraft broke up after being released from a carrier aircraft at high altitude, according to Ken Brown, a photographer who witnessed the plane breaking apart.

One pilot was found dead inside the spacecraft and another parachuted out and was flown by helicopter to a hospital, Kern County Sheriff Donny Youngblood said.

The accident occurred just as it seemed commercial space flights were near, after a period of development that lasted far longer than hundreds of prospective passengers had expected.

Branson once envisioned operating flights by 2007. Last month, he talked about the first flight being next spring with his son.

"It's a real setback to the idea that lots of people are going to be taking joyrides into the fringes of outer space any time soon," said John Logsdon, retired space policy director at George Washington University.

Friday's flight marked the 55th for SpaceShipTwo, which was intended to be the first of a fleet of craft. This was only the fourth flight to include a brief rocket firing. The rockets fire after the spacecraft is released from the underside of a larger carrying plane. During other flights, the craft either was not released from its mothership or functioned as a glider after release.

At 60 feet long, SpaceShipTwo featured two large windows for each of up to six passengers, one on the side and one overhead.

The accident's cause was not immediately known, nor was the altitude at which the blast occurred. The first rocket-powered test flight peaked at about 10 miles above Earth. Commercial flights would go 62 miles or higher.

The problem happened about 50 minutes after takeoff and within minutes of the spaceship's release from its mothership, said Stuart Witt, CEO of the Mojave Air and Space Port.

Virgin Galactic - owned by Branson's Virgin Group and Aabar Investments PJS of Abu Dhabi - sells seats on each prospective journey for $250,000. The company says that "future astronauts," as it calls customers, include Stephen Hawking, Justin Bieber, Ashton Kutcher and Russell Brand. The company reports receiving $90 million from about 700 prospective passengers.

Ken Baxter was one of those who had signed up to be among the first to make the flight.

Despite the disaster, Las Vegas resident Baxter said he was confident that the flight will happen one day.

"It's very sad for the test pilots, but I'm ready to go into space with Richard Branson," he said.

Friday's accident was the second this week involving private space flight. On Tuesday, an unmanned commercial supply rocket bound for the International Space Station exploded moments after liftoff in Virginia.

"It's an enormously sad day for a company," Rutan told The Associated Press in a phone interview from his home in Idaho, where he has lived since retiring.

Friday's death was not the first associated with the program. Three people died during a blast at the Mojave Air and Space Port in 2007 during testing work on a rocket motor of SpaceShipTwo.