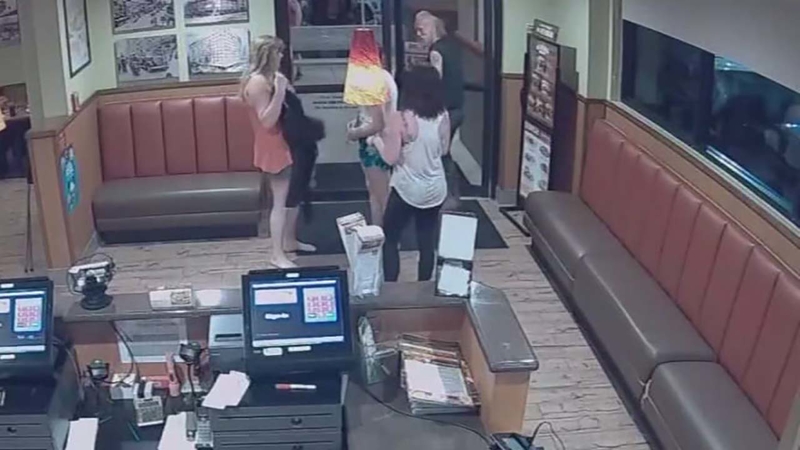 HOUSTON, Texas (KTRK) -- A man is fighting for his life after an altercation involving the husband of a Harris County Sheriff's deputy.

John Hernandez, 24, is being kept alive by machines, according to family members. He hasn't woken up since a violent confrontation late Sunday night and they do not expect him to.

"They say his brain is dead. There's nothing they can do," said Hernandez's wife, who asked not to be named.

She said Hernandez, who was drunk, went outside a Denny's on the Crosby Freeway to urinate when the husband of a Harris County Sheriff's deputy confronted him. The deputy's husband had stopped to eat with his family.

Surveillance video from inside the restaurant shows a scuffle outside and a man wearing an orange shirt taking another man down. He then holds him down for several minutes. According to Hernandez's wife, the man in the orange was the deputy's husband and the man under him was her husband.

"He was on the floor and the other guy was punching him on his head and he wouldn't stop," she said, moving her arms in a punching motion.

She and Hernandez have a 3-year-old daughter.

The Harris County Sheriff's Office confirmed sometime during the fight, the deputy, who was off-duty, arrived and also restrained Hernandez. The couple then noticed he wasn't breathing and "the off-duty deputy immediately began CPR and continued until EMS arrived and transported the man (Hernandez) to LBJ hospital for treatment."

The deputy's husband told investigators he was defending himself after taking the first punch. The deputy remains on the job.

The video shows a crowd of eyewitnesses, including a restaurant employee who spoke to Eyewitness News.

A HCSO investigation into the violent confrontation is underway.

Attempts to reach the deputy and her husband were not successful.