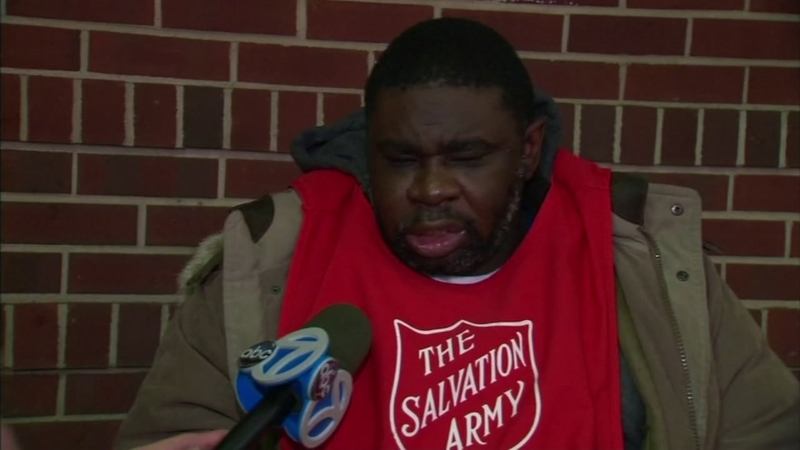 GREENBURGH, NY (KTRK) -- A blind Salvation Army ringer in New York was beaten and now a couple has been arrested in the attack.

Juan Rodriguez, 30, and Audrianna Wignal, 21, are charged with felony assault after they allegedly punched and kicked Jermaine Simmons, 41, on Saturday before throwing his Salvation Army kettle filled with coins at his head.

It was a vicious assault that left Simmons with a fractured eye socket and fractured nose.

Simmons is legally blind and has cerebral palsy. In spite of his injuries, he's back at work collecting for the less fortunate.

Simmons says the couple attacked him just because he allegedly cut in line at a Smash Burger restaurant.

"They threw the kettle at me," Simmons says. "They threw a ketchup bottle at me and my whole face was bleeding."

Sgt. Robert Whiting with the Greenburgh Police say the incident is "just a shame."

"He's very dedicated, he's been doing this for several years, he works with them every year and he's out there in the elements just to raise money for the poor," Whiting says.

Simmons says he's not supposed to work because of his disability, but works so he can earn a living.

The victim has switched locations away from the wine store where he was previously stationed.

"We have food here, we usually feed them and for some reason he went to eat across the street," store manager Rudy Pali says. "And next thing we know we saw a lot of police over there."

Wignal sobbed during her arraignment, where both she and Rodriguez were charged with third-degree assault.

Both of the accused attackers are out on bail, but that's of little consequence for many in this New York community.

"This time of the year, when everything should be love and care for each other, situations like this is just irritating I think to everyone," says Alex Castillo with the Salvation Army.