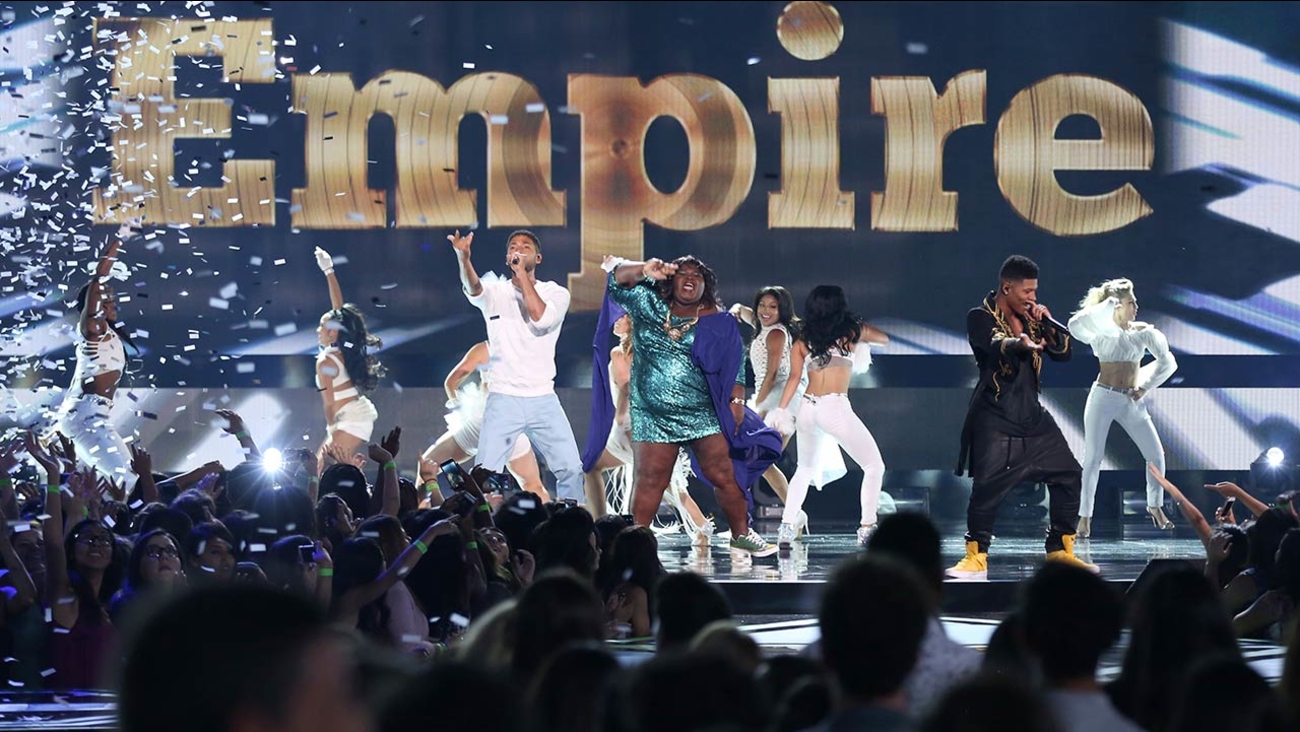 Jussie Smollett, from left, Gabourey Sidibe and Bryshere Y. Gray of the "Empire" cast perform at the Teen Choice Awards at the Galen Center on Sunday, Aug. 16, 2015, in Los Angeles (Photo by Matt Sayles/Invision/AP)

The two-hour teen celebration, broadcast live Sunday night, kicked off with a victory lap for the weekend box-office hit "Straight Outta Compton." Ice Cube and the young stars of the N.W.A biopic, which earned an estimated $56.1 million over the weekend, welcomed the young crowd to Los Angeles' Galen Center.

Christopher "Ludacris" Bridges, the rapper and "Furious 7" co-star, was one of three hosts, alongside "Jane the Virgin" star Gina Rodriguez and actor Josh Peck. Bridges' film, one of year's biggest big-screen hits, was one of the night's top winners, winning best action movie and best actor in an action-adventure for the late Paul Walker.

"Paul Walker is here in spirit with us," said Vin Diesel, a star in the street racing franchise. He applauded a "special, special" teen in the crowd: Walker's daughter Meadow.

The Teen Choice Awards spread awards across movies, music, TV, fashion, sports and digital media, celebrating the favorites - from Channing Tatum to Wiz Khalifa to Stephen Curry (all winners Sunday) - of one of media's most powerful demographics.

As a pop star, Spears was a regular at the Teen Choice Awards, collecting its trademark trophies - surfboards - many times over the years, including its version of a lifetime achievement award in 2009.

On Sunday, Spears, her blonde hair partially dyed blue and purple, was honored for being a style icon. She dedicated the award to her sons, Sean Preston and Jayden James, and niece Lexie, who were in the audience.

The hip-hop drama "Empire" won breakout TV show and provided one of the show's most memorable moments. While Jussie Smollett and Yazz performed "You're So Beautiful," a song from the series, the show's Gabourey Sidibe made a surprise cameo, exuberantly dancing among the back-up dancers.

Several awards went to "The Hunger Games: Mockingjay, Part 1," including best actor in a sci-fi or fantasy for Josh Hutcherson. He reflected on the end of the franchise, with this fall's "Mockingjay, Part 2," like a coming graduation.

"'Hunger Games' has been a huge part of my life for almost five years now. It's coming to an end and it's really sad," said Hutcherson. "So if we want to cry together, we can do that because it breaks my heart."

Harris County voters can go on with drive-thru voting