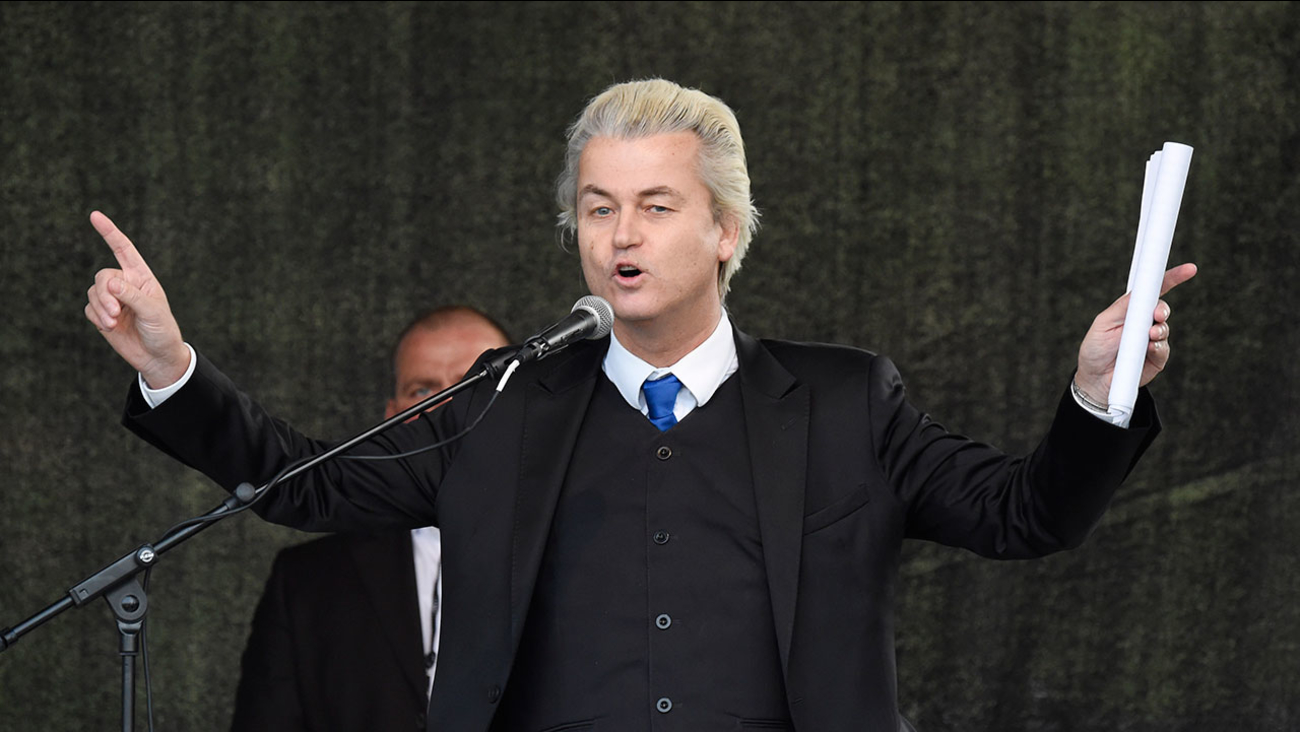 Geert Wilders, leader of the Dutch anti-Islam Freedom Party, speaks at a rally of so-called 'Patriotic Europeans against the Islamization of the West' (PEGIDA) in Dresden, Germany. (AP Photo/Jens Meyer)

BRUSSELS, Netherlands -- The Dutch anti-Islam political leader who was guest of honor at the Prophet Muhammad cartoon show in Garland, Texas, where gunmen opened fire called Thursday for more such exhibitions as a show of defiance.

Geert Wilders of the Dutch PVV Freedom Party said in a telephone interview that he wants to set up a special Prophet Muhammad cartoon show at the Dutch legislature in The Hague and said all parties who back freedom of expression should rally around the idea.

Wilders said that "the most important reaction to the attack on freedom of expression was to make sure that everybody sees this."

Wilders spoke at the show but departed before the shooting that injured a security guard and left the two attackers dead.

The firebrand politician has often been accused of excessive anti-immigrant and anti-Islam rhetoric; his party, with 12 seats in the 150-seat Dutch parliament, is often ostracized by other mainstream groups. Wilders himself has lived under constant police protection for years after receiving death threats.

The Garland show turned out to be one of his most dangerous outings. He left the venue only shortly before the two gunman attacked.

Still, Wilders insisted this was no time to lie low.

"If we show fewer of these cartoons, we will show the people who use violence and terror that their tactics work," he said. "So we have to show as many cartoons as possible as a reaction to that violence."

He said his next challenge is to get backing to organize the show at the Dutch legislature.

"There is no party which will be able to say, without blinking, that it is against this," he said, "because this is about defending the freedom of expression."
Related topics:
u.s. & worldcartoon
Copyright © 2021 by The Associated Press. All Rights Reserved.
TOP STORIES
CDC expected to backpedal on some masking guidelines
Simone Biles explains why she 'took a step back' from team finals
Cooling downpours Tuesday bring heat relief to some
UT and OU officially request to join powerhouse SEC
'This is how I'm going to die': Officers tell Jan. 6 stories
Texas shooter dies after party-goers throw bricks at him
2 Houston college students recall 12-hour robbery and kidnapping
Show More
Innocent man killed after speeding truck driver runs light, HPD says
Man arrested after 2 women, 2 young children struck while walking
Trump endorses Paxton for 3rd term as Texas attorney general
Crocodile bites 18-year-old and drags her into water in Mexico
Man pleading guilty to 4 of 8 Atlanta-area spa killings
More TOP STORIES News