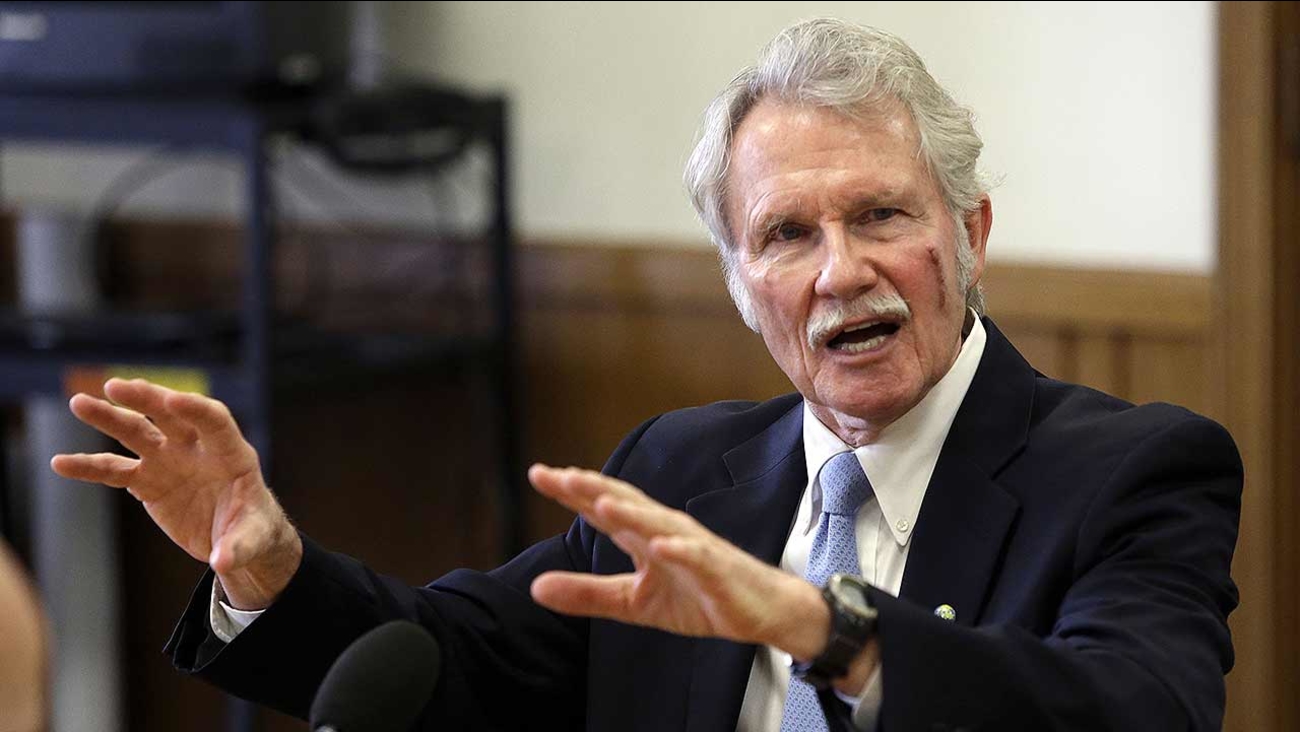 AP
SALEM, OR -- Oregon Gov. John Kitzhaber resigned Friday, giving in to mounting pressure to abandon his office amid suspicions that his fiancee used her relationship with him to land contracts for her green-energy consulting business.

In a lengthy statement, the state's longest-serving chief executive insisted he broke no laws. He said the resignation would be effective Wednesday.

"Nonetheless, I understand that I have become a liability to the very institutions and policies to which I have dedicated my career and, indeed, my entire adult life," he said.

The decision capped a wild week in which Kitzhaber seemed poised to step down, then changed his mind, but ultimately bowed to calls from legislative leaders that he quit the state's top elected position.

The announcement is a stunning fall from grace for a politician who left the governor's office in 2003 and then mounted a comeback in 2010 and won back his old job.

Secretary of State Kate Brown, a Democrat like Kitzhaber, was expected to assume the office and become the first openly bisexual governor in the country. Unlike most states, Oregon does not have a lieutenant governor, and the state constitution puts the secretary of state next in line.

In addition to the written statement, Kitzhaber released audio of himself reading from it. At the end, his voice trembled, and he seemed to be choking back tears.

His statement was defiant, saying it was "troubling" that "so many of my former allies" had chosen to "simply accept" that he had done something wrong, referring to Democrats who had abandoned him.

"I am confident that I have not broken any laws nor taken any actions that were dishonest or dishonorable in their intent or outcome," he said.

Kitzhaber called Brown back to Oregon from a conference in Washington, D.C., earlier this week. People close to Kitzhaber say he asked her to return after deciding to resign but then changed his mind. That led to a Wednesday meeting between Kitzhaber and Brown that she described as "strange."

By Thursday, the leaders of the state House and Senate said he had to go. Other top officials in the overwhelmingly Democratic state also said Kitzhaber should resign.

"I finally said, 'This has got to stop,'" Senate President Peter Courtney said after he met with Kitzhaber. "I don't know what else to do right now. It seems to be escalating. It seems to be getting worse and worse."

Kitzhaber handily won re-election in November to a fourth term after surviving the botched rollout of Oregon's online health care exchange, which turned into a national embarrassment.

But the allegations surrounding the work of his fiancee, Cylvia Hayes, work were more harmful, dominating headlines in the state following his victory.

A series of newspaper reports since October have chronicled Hayes' work for organizations with an interest in Oregon public policy. At the same time, she was paid by advocacy groups and played an active role in Kitzhaber's administration, a potential conflict of interest.

The spotlight on Hayes led to her reveal that she accepted about $5,000 to illegally marry a man seeking immigration benefits in the 1990s. Later, she admitted she bought a remote property with the intent to grow marijuana.

Though questions about Hayes have swirled for months, the pressure on Kitzhaber intensified in recent weeks after newspapers raised questions about whether Hayes reported all her income on her tax returns. She has not publicly addressed the allegation and Kitzhaber has declined to. Earlier this week, Oregon Attorney General Ellen Rosenblum said she was launching a criminal investigation.

Kitzhaber has consistently maintained that he and Hayes worked hard to avoid conflicts between her public and private roles.

A fiercely private person, Kitzhaber has been forced to answer embarrassing and personal questions about his relationship. In response to questions at a news conference last month, Kitzhaber told reporters that he's in love with Hayes, but he's not blinded by it.

Kitzhaber, 67, met Hayes, 47, before the 2002 election, when he was governor and she was a candidate for the state Legislature. She lost her race, but they later reconnected after Kitzhaber's term ended.

After eight years out of office, Kitzhaber returned to the governor's office again in early 2011. Hayes used the title "first lady," though the couple never married, and she took an active role in his administration. They were engaged last summer.

The scandal over alleged influence-peddling was not the only one to hammer Kitzhaber since his return as governor. The former emergency room physician and passionate advocate for health care reform was embarrassed last year when Oregon was the only state that was unable to launch an online health insurance exchange in the first year of the federal health care law.

Oregon spent millions of dollars in federal grant money but has abandoned the technology for Cover Oregon. The state and its main technology contractor, Oracle Inc., are blaming each other for the failure in multiple lawsuits.

Before the Cover Oregon debacle, Kitzhaber had racked up a series of successes. He convinced lawmakers to overhaul the state Medicaid system, then convinced the Obama administration to give Oregon $2 billion to implement it. He spearheaded cuts to retirement benefits for public employees despite being elected with considerable help from the unions whose members lost out.

After the successes, top Republicans declined to challenge Kitzhaber in last year's election. He easily defeated state Rep. Dennis Richardson, who relentlessly pounded Kitzhaber over the Hayes scandal but was unable to overcome Oregon voters' aversion to his socially conservative views.

Kitzhaber has an acute understanding of the Legislature and how to use the power of the governor's office to achieve his objectives. He proved adept at isolating the people he disagreed with, but he also angered his supporters and was left with few friends. When he got into trouble, his fellow Democrats did not speak up.