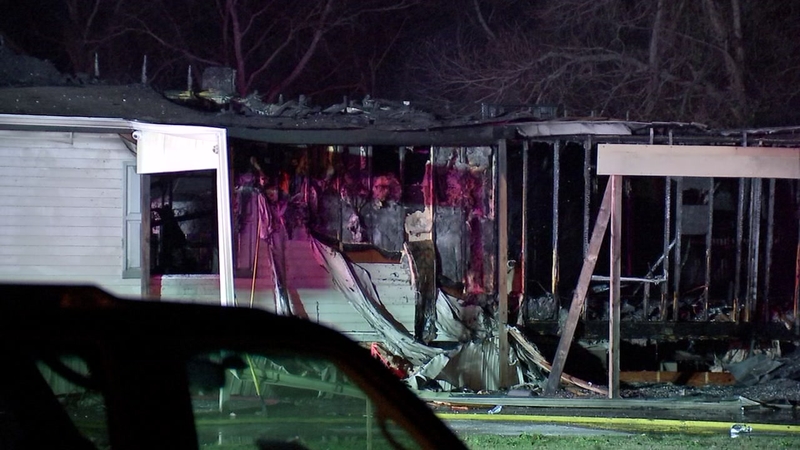 CROSBY, TX (KTRK) -- Five people, including three children, escaped with their lives after a fire destroyed their mobile home in Crosby overnight.

Two adults were rushed to Memorial Hermann Hospital with burns, but the kids were not injured.

Neighbors said they heard an explosion sometime around 9pm, just before the double-wide trailer was engulfed in flames.

An adult male was taken to the hospital via Life Flight, while a ground ambulance rushed an adult female to Memorial Hermann.

Raw video shows the aftermath of a massive fire that destroyed a mobile home in Crosby.

The relationship between the adults and the children inside the home was not immediately clear.

A neighbor who spoke to Eyewitness News said he heard something explode and ran outside to see what had happened.

That is when he saw the flames shooting into the sky, and went to call 911.

"I don't know what caused the explosion, but it was pretty loud," he said. "We thought someone hit the house or something, with a car, or there was a wreck in front of the house."

As fire crews worked to tap out the flames, the eyewitness said the immediate concern was for nearby homes.

Heavy winds only complicated firefighters' work, and had the witness fearful the fire could spread.

A man and woman were burned when their Crosby trailer erupted in flames #ABC13 #hounews pic.twitter.com/jJVYbOb1vI

"The way the wind was blowing, we didn't want anything to happen...because we have kids, you know?" "I'm just glad everybody's okay."

Investigators say the mobile home is a total loss, and the cause of the fire is under investigation.
Related topics:
crosbymobile homesexplosionman injuredwoman injuredhouse fire
Copyright © 2021 KTRK-TV. All Rights Reserved.
More Videos
From CNN Newsource affiliates
TOP STORIES