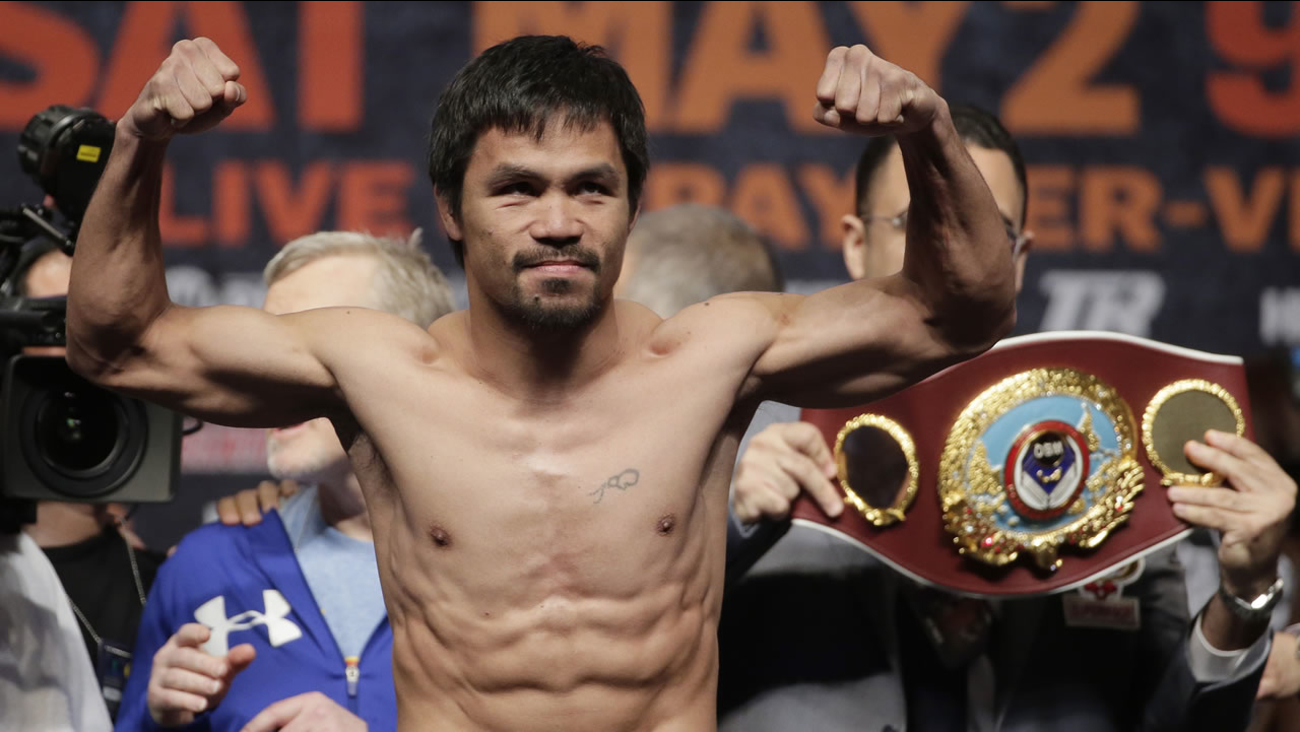 Manny Pacquiao poses during his weigh-in on Friday, May 1, 2015 in Las Vegas. The world weltherweight title fight between Floyd Mayweather Jr. and Pacquiao is scheduled for May 2. (AP Photo/Chris Carlson)

LAS VEGAS, NV -- If this was truly Manny Pacquiao's final fight, as he has said, he went out with a near-vintage performance.

He knocked rival Timothy Bradley Jr. down twice, in the seventh and ninth rounds, and cruised to a unanimous decision in their welterweight fight Saturday night before 14,665 at the MGM Grand Garden Arena.

In the best fight of their trilogy, Pacquiao, perhaps bringing the curtain down on his legendary, 21-year career, won going away 116-110 on all three judges' scorecards. ESPN.com also scored it for Pacquiao 117-109.

A look back: Fight with Mayweather 'important for my legacy'
EMBED More News Videos

Manny Pacquiao talks about why he needs to win the fight against Floyd Mayweather and the possibility of a rematch in the future.

Many fans in Las Vegas were not happy about the outcome of the Floyd Mayweather Jr. and Manny Pacquiao fight.

Pacquiao (58-6-2, 38 KOs), 37, rebounded nicely from May's unanimous decision loss to Floyd Mayweather in their megafight, which was followed by surgery to repair a torn right rotator cuff.

"I was looking for a knockout in every round," Pacquiao said. "He's a very tough fighter and a very good counter-puncher. Bradley is a good boxer, a great fighter and a good man. It was not easy tonight, [but] my right shoulder was fine. It gave me no problems."

Pacquiao officially won the trilogy 2-1. Bradley was awarded a hugely controversial split decision when they met for the first time in 2012, and Pacquiao appeared to dominate that fight. Then he got a unanimous decision in their 2014 rematch, which he also dominated. He dominated Bradley (33-2-1, 13 KOs), 32, of Palm Springs, California, again in fight No. 3.

One incredible fight: Mayweather vs. Pacquiao


"Manny was very strong in there. Very heavy punches. He was also very patient," said Bradley, who has won five world titles in two weight classes. "I wasn't professional enough to stay patient myself, and I walked into shots."

Although Pacquiao, who likes Bradley and invited him to his Sunday prayer breakfast after the fight, looked sharp, he declared that he was indeed retiring.

"Yes, as of now I am retired," Pacquiao said. "I am going to go home and think about it, but I want to be with my family. I want to serve the people [of the Philippines]."

Through thick and thin. Always by my side no matter what. To God be the glory. pic.twitter.com/bGuHo8YVbw

He intends to retire to a life of charitable work and politics in the Philippines, where he is a two-term congressman running for a senate seat. The election is next month, and he is favored to win one of the 12 seats up for election.

Trainer Freddie Roach said leading up to the fight that he would be supportive of whatever decision Pacquiao made about his career, but after seeing how well he fought, Roach said he would be happy to see him continue.

"I loved the way Manny threw his combos. He may be a little rusty, but if he wants to continue fighting, I think he can still go," Roach said.

There was not much action in the early going, but it eventually picked up and became quite an entertaining scrap.

Bradley counter-punched well early and showed a lot of movement, but Pacquiao landed some sharp, straight left hands. The action picked up considerably in the fifth round, as both fighters began to look for big shots. Bradley swung and missed wildly with some of his but also landed, as did Pacquiao. There were multiple exciting exchanges that had the crowd cheering. Pacquiao fired fast combinations -- he still has his speed -- through the middle of the fight, while Bradley struggled to find the target.

Pacquiao scored a flash knockdown just before the bell ended the seventh round. He landed a left hand and a right that forced Bradley to double over and touch his gloves to the canvas.

"I don't think the first knockdown was a real knockdown, but Pacquiao did a great job in there," said Teddy Atlas, training Bradley for the second time. "Give Pacquiao credit. I didn't do enough of a job for Bradley."

Bradley, who got a tongue lashing from Atlas after the seventh round, came on strong in the eighth as he landed three hard left hooks, among other shots, that forced Pacquiao into the ropes. He appeared to be in trouble, but the round came to an end, and Bradley could not capitalize.

If Bradley was not badly hurt on the seventh-round knockdown, he sure was when Pacquiao dropped him hard with a little less than a minute left in the ninth round. Pacquiao had landed a few hard left hands a few seconds earlier, and then he landed another clean one that knocked him down.

The historic boxing match between Floyd Mayweather, Jr. and Manny Pacquiao is expected to gross about $400 million.

Said Bradley: "Yeah, he caught me good on that one. He's just very quick and very explosive. Great reflexes, and it is hard to defend. Congrats to Manny."

Pacquiao, who made $20 million, and Bradley, who earned $4 million, not only touched gloves at the start of the 12th round -- No. 36 of their trilogy -- but they also hugged as a show of respect for each other. They fought what might have been the final three minutes of Pacquiao's glorious career as the crowd chanted "Manny! Manny!"

He stood atop boxing along with Mayweather for years, until, at long last, they met in May in a fight that shattered every revenue record and generated around $600 million. Mayweather fought once more in September, easily beating Andre Berto, and retired.

Next it was Pacquiao's turn. Although he waffled about retirement at times, he was definitive at the final news conference Wednesday. "This is my final fight," he said, and after the fight, he said again that he is finished.

If he is, he will close the book on his legendary career as one of the greatest fighters to ever put on gloves. He turned pro in 1995 at 106 pounds, won his first world title at flyweight (112 pounds) in 1998 and went on to win world titles in a record eight weight divisions, from flyweight to junior middleweight (154 pounds), and beat a who's who of his era, including Oscar De La Hoya, Miguel Cotto, Antonio Margarito, Ricky Hatton, Shane Mosley, Marco Antonio Barrera (twice), Erik Morales (2-1) and Juan Manuel Marquez (3-1).

But he lost the biggest of them all in May, when Mayweather outboxed him in a unanimous decision in one of the most hyped fights ever and the richest in history. Coming back from that loss and off surgery, Pacquiao's supposed career finale was not the caliber of event he had been used to. There was a public backlash over the disappointing fight with Mayweather, at a record $100 for the pay-per-view, and Pacquiao's anti-gay remarks earlier this year, when he said homosexuals were "worse than animals."

He was fighting Bradley for the third time after two previous fights that were not particularly well-received. Most did not see a reason for the third meeting, and it was clear by the lack of buzz. But in the end, the fans got a good fight, and Pacquiao, if he elects to, will retire on his own terms.

"I have a commitment to my family that I am going to retire after this, but I don't know," he said. "Maybe I will enjoy being a retired man and helping the people. Thank you to all the fans in boxing, especially Filipinos. I appreciate all of your help and support."
Related topics:
sportsnevadaboxingretirement
Copyright © 2021 ESPN Internet Ventures. All rights reserved.
TOP STORIES
1 shot, 1 stabbed at Houston Community College campus, HPD says
Houston health care leaders sound alarm on spike in COVID-19 cases
Fatal crash blocks northbound US-59 feeder at Crabb River Road
Imprisoned 'Dating Game Killer' Rodney Alcala, 77, dies in California
Vaccines are 'personal decision,' Hillsong Church founder says
Texas A&M System Board of Regents to meet on 'SEC issues'
$1.5 million in bonds set for HFD ambulance hijacking suspect
Show More
Hot and hazy weekend ahead but more rain expected next week
60% chance of development along the eastern seaboard
Katy ice cream shop staffed by adults with special needs opened
ABC13 Houston names new morning anchor
Sleeping 7-year-old hit by bullet in NE Harris Co. drive-by shooting
More TOP STORIES News