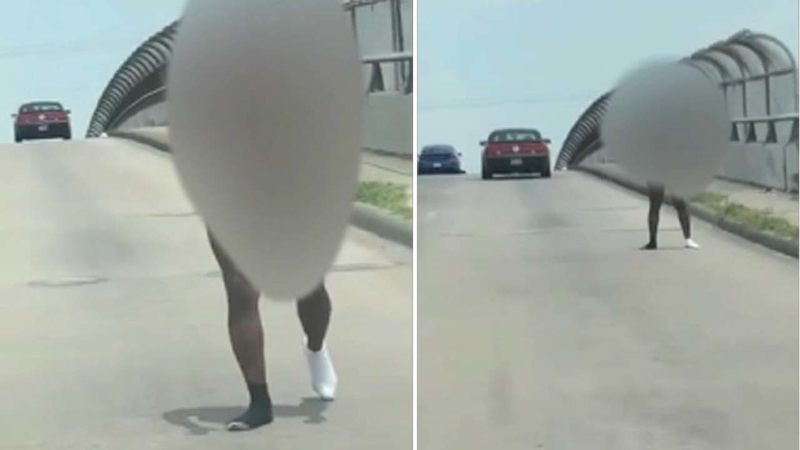 Naked man jumps on Houston woman's car and exposes himself

HOUSTON, Texas (KTRK) -- You can't make some things up, like the story of a naked man jumping on a car with a mom behind the wheel and her two young kids in the back seat.

It is date-stamped on her cell phone, at 1:34 Friday afternoon. The location was the Parker Road bridge, near Sam Houston High School.

In the video, wandering in traffic, was a man, who was wearing only socks.

"One was black and the other was white," said Dreek. "I had a friend with me and we were laughing. He was walking up to cars and then he saw us."

The video shows a man approaching Dreek's car, and within seconds, he is on the hood, pressing himself against the windshield and fondling himself.

"I told my kids to cover their eyes," she said. "I didn't know what to do next."

He refused to get off the car, "and he had a smirk on his face," she said. "That's when I starting driving forward. He still wouldn't get off."

Driving with a naked man, obstructing her view of the road, was not a good idea.

Dreek prepared to hit the brakes, and she said he seemed to know what was coming next.

What happened next, according to her description, is that the man flew off the car, onto to pavement.

His exposed parts hit the concrete, and he rolled over several times.

Naked man jumps on hood of woman’s car in northeast Houston- and she hit record on her camera. You’ll see the PG version at 10! #abc13 pic.twitter.com/m2B1sSlJ2l

"I didn't want to hit him with my car," said Dreek. "It could've been really bad."

Unfazed, she said the man got up and started approaching other cars.

Dreek didn't stay to see what happened next.

She did not report the incident to Houston police at the time, but she said she plans to now.

"Sam Houston High School is near there. HISD is out now for the summer, but if kids had been in the area, it could have been a lot worse," she said.

She describes the man as being in his early 20's, and wearing colored braces.

"I think he had to be on drugs. What else could explain someone walking around naked, in the middle of the day, wearing socks?" she asked.