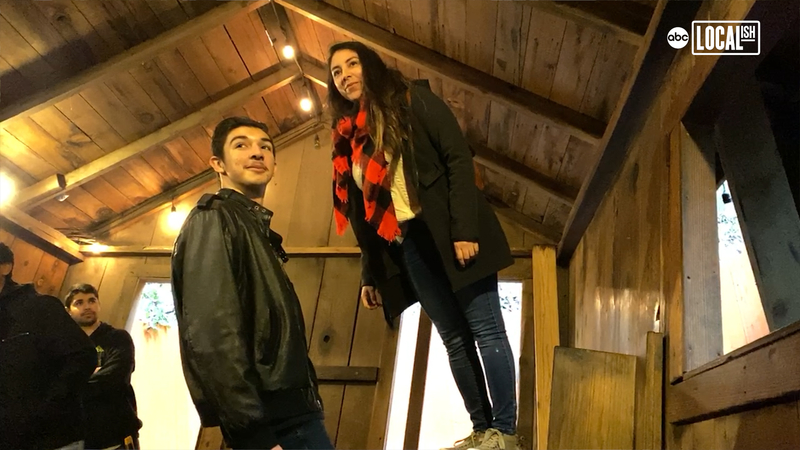 SANTA CRUZ, Calif. -- In January 1940, a man by the name of George Prather built a cabin in the Santa Cruz Mountains in Northern California in a place that he was warned to never build.

Can you solve the mystery of the Mystery Spot?

My story for the day: @TheMysterySpot in Santa Cruz! 2020 marks 80 years since this tool shed was built and slid down the hill. Why it stopped in this exact location without tumbling down? It’s a mystery. pic.twitter.com/3Gkw0Bjnfb

RELATED: Stay in a haunted hotel room at the Santa Cruz Mountains' Brookdale Lodge, one of the most haunted locations in the world

Those questions began in 1939 when George Prather wanted to buy the land that is now the parking lot of the Mystery Spot.

The lumber company that owned the land made him a deal that he could buy the land if he bought the hillside next to it.

However, Prather was warned by the company to not put anything on the hill as anything built there slid down to level ground.

80 years ago, in January 1940, Prather built a cabin that would be the iconic symbol of one of the most mysterious places in the world.

"A lot of people feel very nauseous, lightheaded, dizzy and a little bit woozy," Lucero said. "Once they enter the cabin, some people have extreme vertigo. Some people can't even be in the cabin. They won't even look at the cabin."

The cabin slid ten feet down the hill from where it was originally erected to what is known as the center of the mystery spot.

That's where it reached equilibrium and where a team of surveyors found that they had incorrect compass readings up to 180 degrees off.

When you visit the Mystery Spot, you can physically see the cabin leaning downhill.

But when you walk inside, there are six different demonstrations that show the gravitational anomaly that takes place here.

You can lean over at an acute angle to the floor without falling.

A pool ball seemingly rolls uphill despite being on a level surface.

You and a friend can stand in one location and be one height, but switch and completely change sizes despite being on level ground.

The cabin has mystified the 600,000 yearly visitors since the location opened to the public.

.@TheMysterySpot defies physics, gravity and logic. You can feel an instant sense of vertigo when you walk around the cabin. It gets pretty crazy when you do the famous lean off of the bench inside! pic.twitter.com/UcHevsYZE4

"I'm completely mind blown here," Orlando Ahumada said. "The first I came, I thought it was a little bit scamish. But it turned out to be amazing, I had a lot of fun here."

"It felt like I was actually going to fall off and really hit my face on the other side," Connie Jasso said.

But it's not just tourists that visit the California Historical Landmark.

The Mystery Spot shares similarities with other locations in the United States, but it remains world-famous thanks to a little yellow sticker.

If you’ve ever seen these bumper stickers, you know that person has experienced the craziness that is @TheMysterySpot. If you haven’t been, stay tuned for the tour brought to you by @abc7newsbayarea and @localish! pic.twitter.com/1pVVcHjSdC

Millions have visited the Mystery Spot over the past 80 years and many continue to come back to witness the weirdness and solve the mystery.

Even after advances in science, no one has solved the secret and Lucero says that no one ever will.

"I came here when I was a little kid and I was so blown away and what was going on," Lucero said. "Now that I'm here, it's still a mystery to me. To the people who want to come and solve the mystery, I just say to them don't even try. Nobody's figured that out in the past 80 years, might as well just come on down here and have fun and get your mind blown."