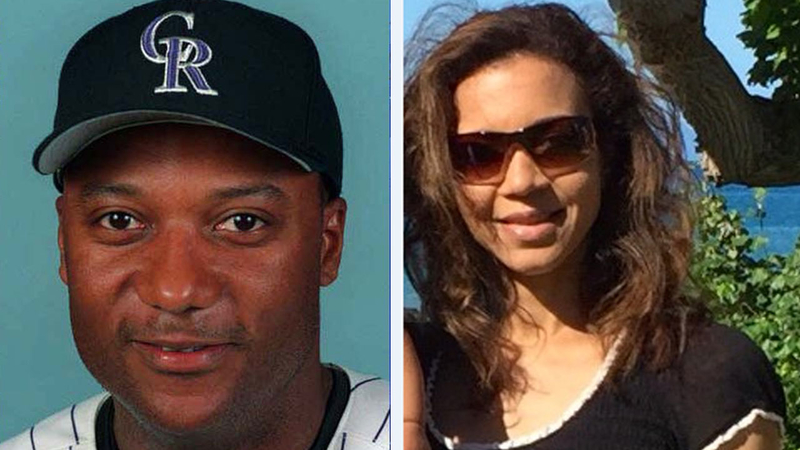 Woman in murder-suicide has history of violence

PEARLAND, TX (KTRK) -- The woman who shot and killed former Major League Baseball player Darryl Hamilton in an apparent murder-suicide had violence in her past.

Police were called Sunday afternoon to a home in the 11500 block of Island Breeze. The call was about a disturbance inside.

Once officers entered the home, they found Hamilton, 50, dead near the entrance and Monica Jordan, 44, dead in another area of the home. Police say it appeared Hamilton suffered several gunshots and Jordan had a self-inflicted gunshot wound.

The couple's 14-month-old was in the home at the time but the toddler was unhurt. The child was turned over to Child Protective Services. We've learned the couple just came to an agreement on custody of that child last week.

"He was excited. He was upbeat. We never discussed a protective order or anything that would come close to what she did. It's unimaginable that she would do this," said Gary Zimmerman, Hamilton's family law attorney.

Jordan, an attorney up until recently employed with an international oil and gas company, had two other children with her ex-husband and that relationship was not without violence.

According to the Brazoria County District Attorney Jeri Yenne, Jordan pleaded guilty in 2008 to burning down the Pearland house the couple shared when they were married. Video posted on YouTube from back then was dramatic. Yenne says Jordan accused her ex-husband of cheating and chased him around the house trying to douse him with gasoline. He has custody of their children.

R. Trent Gaither, the criminal defense lawyer who represented Jordan in that case, sent this statement:

"Anyone who truly knew Monica is utterly shocked by the events that have been reported. Monica was a wonderful and dedicated mother and highly successful lawyer and businesswoman. My thoughts and prayers go out to everyone affected by this tragedy."

On Sunday, Father's Day, Hamilton changed his profile picture on Facebook showing him with his two older sons in jerseys bearing his name. Zimmerman believes he also spent the day with his youngest son and when he returned him that afternoon, Jordan shot Hamilton several times then shot herself. The couple broke up months earlier, according to Zimmerman.

"Jaxon has no mother or father. God only knows what happened inside the house causing her to take Darryl's life," said Zimmerman.

According to court records, Hamilton was to pay Jordan child support in the amount of $1,300 per month beginning this August.

Police have not said what motivated the attack.

Both bodies were transported to the Galveston County Medical Examiner for examination. The investigation is ongoing.

He says Hamilton used to be a regular on one of his shows and that he was just on a few weeks ago. Granato texted Hamilton upon hearing rumors last night.

"I said, 'Your name is the news. Just want to make sure you're OK,' and I never heard back," Granato said.

Hamilton, a native of Baton Rouge, Louisiana, played 13 seasons in the Major Leagues from 1988 to 2001. He spent seven seasons with the Milwaukee Brewers and also played for the Texas Rangers, San Francisco Giants, New York Mets and Colorado Rockies. He played all three outfield positions, committing only 12 errors while while batting .291 over the course of his career.

Most recently he was an analyst with the MLB Network.

We mourn the passing of our friend and colleague, Darryl Hamilton. pic.twitter.com/GXcTDgkhi9

The Houston Astros on Monday afternoon issued the following statement:

"The Astros are saddened by the tragic loss of Darryl Hamilton. In addition to his fine, 13-year career as a Major League player and talented MLB Network analyst, Darryl was also a friend of the Astros organization, strongly supporting our youth baseball outreach efforts. Darryl made appearances at the Astros Urban Youth Academy and was a friend to our staff there. The Astros extend our deepest sympathies to Darryl's family and many friends throughout the game of baseball and beyond."