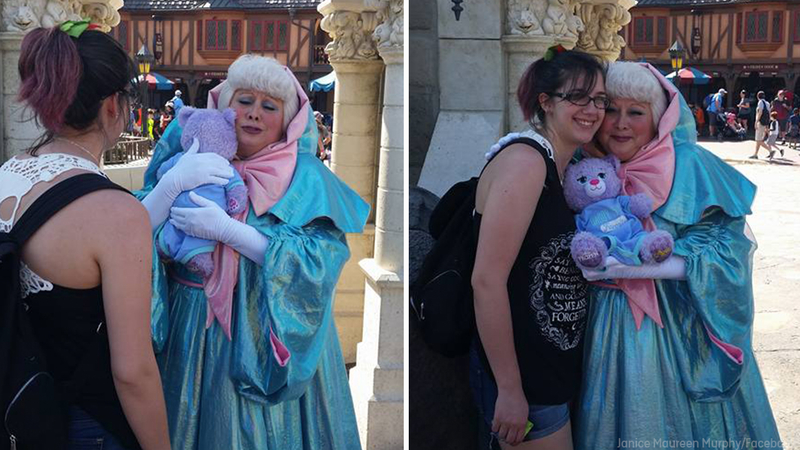 A mom wrote a touching note to a cast member at Walt Disney World after the character's thoughtful tribute to the woman's deceased daughter.

Janice Maureen Murphy shared two images to Facebook on March 21 of the park's Fairy Godmother holding and hugging a purple teddy bear. The bear holds the ashes of Murphy's infant daughter Analiese, who passed away shortly after birth on Feb. 11, 2016, according to Murphy's blog.

The fairy godmother interacted with the teddy bear just as she would with any other child at the park, Murphy wrote. "When you hugged her, and kissed her cheek, you made me feel like Analiese mattered to you."

Murphy's touching Facebook post went on to be shared over 25,000 times, with people sending kind words to both Murphy and her Fairy Godmother.

"What a legacy you are leaving for your daughter. Sending you so much love and hugs," commented one user on Murphy's blog after reading her story.

"We lost our son from Trisomy 13 & 18 and a myriad of other health issues when I was 6-months pregnant in 2013. It's not an easy path to walk but know that you're not alone," commented another.

"I just wanted to let you know that your message/picture did reach your Fairy Godmother, as well as other wonderful friends at the Magic Kingdom," the commenter wrote. "It's these cast members and their interactions with guests that means the most to me and is what I see as true magic. May you and your family have love and strength in this time and throughout your lives."