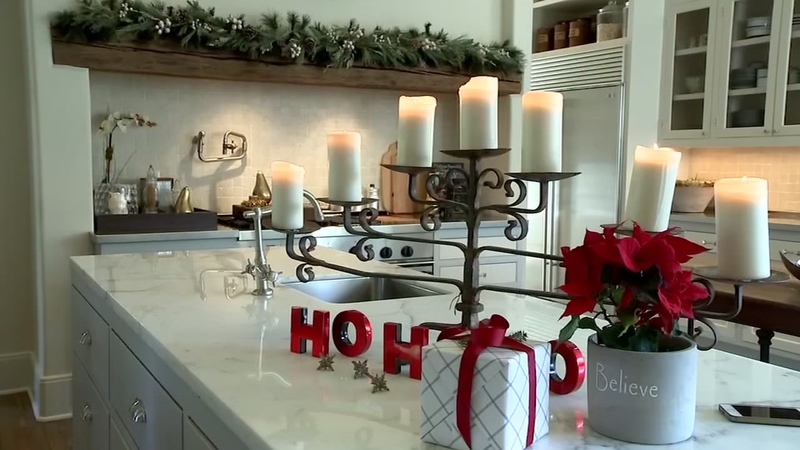 HOUSTON (KTRK) -- It takes a lot to make a house feel like a home, especially after just a few months and lots of time on the road. But with the holidays fast approaching, the Rockets' newest head coach and his family took on the challenge.

With the help of some star power, the D'Antonis made sure they had a home worth of hosting the team for the holidays.

As a pro basketball coach, D'Antoni and his wife, Laurel, have moved around a lot.

"We're in and out of places so quick, you don't really have time to get your roots established," Laurel said.

So to make their Memorial house feel more like home, they decided to invite the entire Rockets team over a holiday party.

"Our basketball family is our family. We bond with them. We have the same kind of life, so my husband wanted to have everybody," Laurel said.

But with a practice on Christmas and a game the day after, they needed to "Deck the Halls" quick. The only problem was their Christmas family keepsakes were gone, lost in the flooding that ravaged West Virginia this past summer.

"We had some macaroni reindeer and we made macaroni out of reindeer heads. We lost a lot of that," Laurel said.

Laurel saw it as an opportunity to start fresh, but needed a team that could get the job done on short notice. Enter Houston interior designers Marie Flanigan and Regina Gust.

"The tree was probably the first thing that we talked about, and Laurel wanted to be able to see it from the street. So the height was super important," Gust said.

The pair added furniture, art and a little bit of that Christmas magic.

"We really wanted to hold back on adding too much extras and too much glamour to really let the evergreen show," Flanigan said.

After 12 days, the partially furnished house they had been living in only since June became an open home for their Rockets Christmas party.

"We had candy canes. We had cookies. It was fun. We had fun. It was just laid back," Laurel said.

And it's that welcoming, family vibe that Mike said might just be the key to some of the team's success.