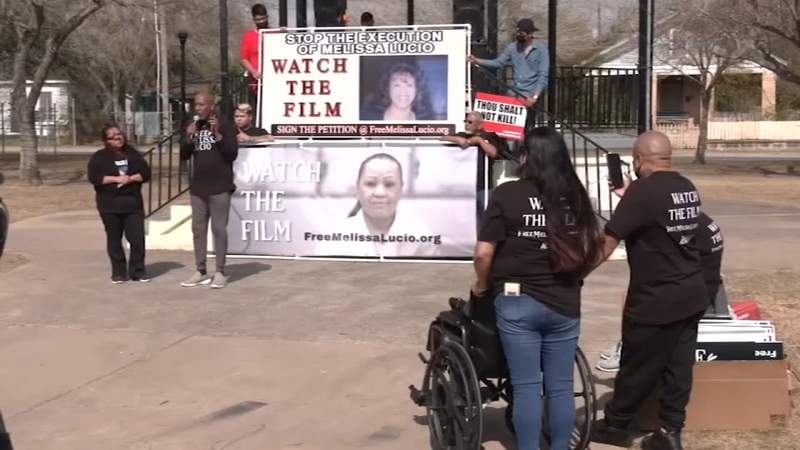 Calls for clemency continue for Texas mom set to be executed

HOUSTON, Texas (KTRK) -- Melissa Lucio has been on death row since August 2008 after being convicted in the death of her 2-year-old daughter, Mariah.

Lucio is set to be executed in April, and many people are pleading with the Texas Board of Pardons and Paroles for her clemency.

"Basically, I told him I am here fighting for my mother's life, and I want her to come home where she belongs," he said in a Facebook video posted by the Free Melissa Lucio page.

Abraham Bonowitz, the executive director of Death Penalty Action, a group against all executions, has been helping bring attention to this case for more than a year.

"We understand that it takes not just really expert lawyers, which Melissa has, but also the court of public opinion. That's where we have really tried to lift that up," said Bonowitz.

Bonowitz is hopeful that their efforts will make a difference for Lucio.

"We're running around in t-shirts that say 'Free Melissa Lucio' and 'watch the film' and have become pretty identifiable in Cameron County," said Bonowitz.

Lucio's supporters say she was not given a fair trial, that her so-called confession was coerced and that her daughter's death was due to an accidental fall down a flight of stairs.

As interest in this case mounts, we asked legal expert Steve Shellist how public opinion can play a part in this situation.

"The average citizen probably doesn't have much of an impact on the clemency process, but if the aggregation of all of these citizens can impact people closer to the governor, then I think it can impact the decision that's made," said Shellist.

Lucio's supporters have brought light to Lucio's father Robert Alvarez, who was sentenced to four years for reckless injury to a child.

The disparity in the sentences in this kind of case is not uncommon, according to Shellist.

"While it's interesting, and it sounds like it's a fantastic argument to make to get people in the public interested or to get elected officials interested, it's common. It happens quite often where there are very different sentences for different people playing different roles in crimes," said Shellist.

Melissa's supporters plan to rally Saturday in San Antonio and Sunday through Monday in Austin outside the Capitol.