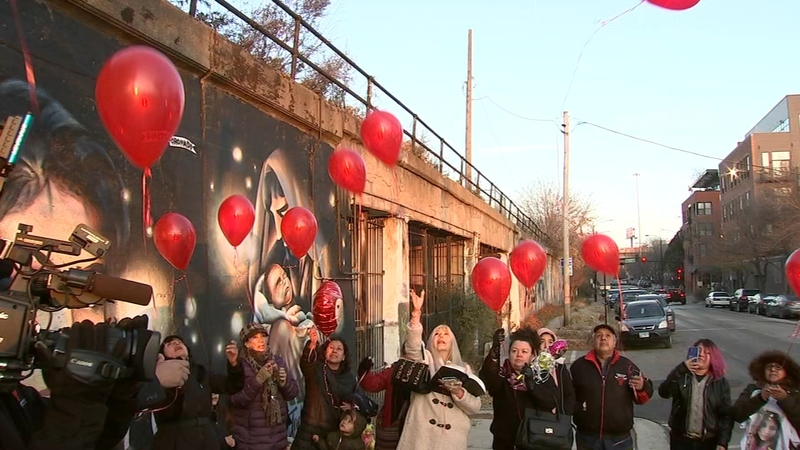 CHICAGO, Illinois -- Saturday would have marked the 20th birthday of Marlen Ochoa-Lopez, the pregnant Chicago teen who was murdered in April.

Her husband, Yovani Lopez, as well as advocates and family members of Ochoa-Lopez participated in a balloon release Saturday.

They released exactly 20 balloons in front of a mural that was painted in her honor in the Pilsen neighborhood.

A balloon release was held Saturday, on what would have been the 20th birthday of Marlen Ochoa-Lopez in Chicago's Pilsen neighborhood.

Six months ago, the young pregnant woman was murdered, and her unborn child was taken from her womb. She was nine months pregnant at the time.

Police say Clarisa Figueroa, 46, lured Ochoa-Lopez to a home with the promise of free baby clothes. But once she got inside, detectives said Figueroa and her daughter Desiree, 24, strangled Ochoa-Lopez to death and took her baby.

Police were seen investigating outside a home on Chicago's Southwest Side where a missing pregnant teen's remains were found.

Both Figueroa and her daughter have been charged in connection with the deaths.

Desiree's boyfriend, Piotr Bobak, is accused of trying to cover up the killing.

All three defendants have pleaded not guilty and remain in custody without bond.

Ochoa-Lopez's husband said he's looking forward to getting justice for his wife and child as the court date nears.

The family is asking for the community to keep a close eye on the case to make sure the offenders get the punishment they deserve.

"We have to do whatever it is in our power and get all witnesses out there," said the family's attorney, Frank Avila. "I do not believe this is a closed case."