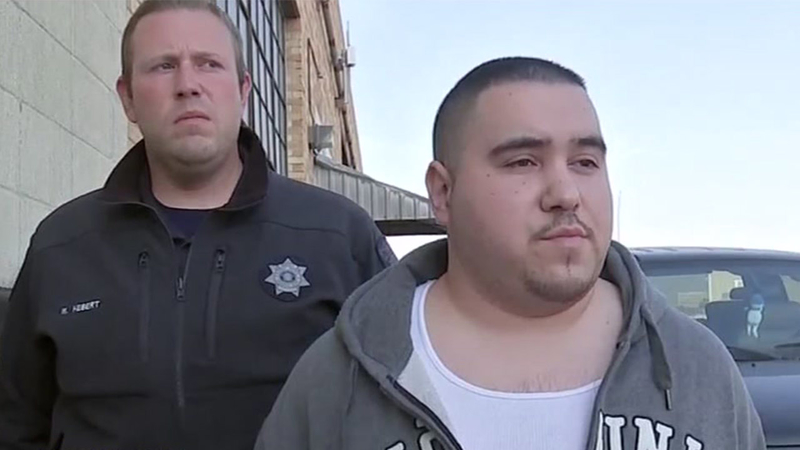 HOUSTON (KTRK) -- The man who unknowingly helped an accused road rage shooter hide his car after the crime says their longtime friendship is over.

Jonathan Pierre, 26, spoke to Eyewitness News about his role just hours after Manuel Cervantes, 25, was arrested for aggravated assault with a deadly weapon.

Cervantes was taken into custody Tuesday by the Gulf Coast Violent Offenders Task Force. He is accused of shooting a 10-year-old girl during a fit of road rage. Only our camera was there as he was brought in for questioning following his arrest.

"They haven't told me what I've been charged with. They haven't shown me a warrant. They didn't read me my rights," said Cervantes as he was led, handcuffed, inside by detectives.

According to court documents investigators tracked Cervantes down following an anonymous tip. The informant had information about where the car was parked that Cervantes was allegedly driving the night of the shooting November 12th.

Detectives say Cervantes rear ended a vehicle near Old Telegraph Road and Ridge Hollow Drive, in which the victim, her two siblings and her mother were riding. He then allegedly then sped off.

When the mother tried to catch up to him, investigators say, Cervantes shot at her three times. One shot hit her vehicle and her ten year old daughter in the back seat. Cervantes claims no knowledge of that.

"No one I have shot no one. I've done nothing wrong," he said.

That same night, Pierre, says Cervantes showed up at his house in Northwest Harris County telling him he had been in a minor accident and asking if he could leave the car in his driveway until it could be towed. He covered it with a tarp and it sat there, Pierre says, for more than a week, until investigators confronted him. Pierre says he's known Cervantes for a decade.

"Had I known, I definitely wouldn't allow that car to be there. Friends don't put friends in bad positions. Whether he's guilty, that's up to the court," said Pierre who also offered his apologies to the young victim and her mother.

According to court documents, Cervantes was driving a gold Cadillac Deville which is registered to an address where he lives with his mother. We found it parked there on Tuesday.

Investigators say the victim's sister took video of the entire incident on a phone.

Cervantes is in jail and his bond is set at $50,000.The little girl's mother told Eyewitness News "justice needs to be served" for her daughter who is expected to make a full recovery.