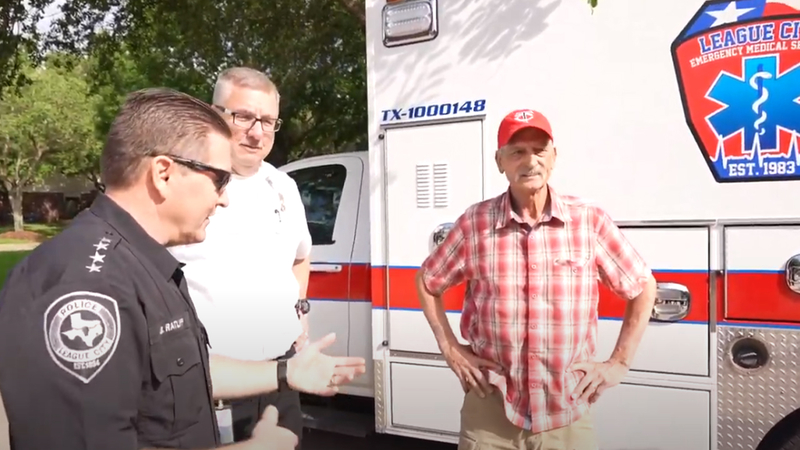 LEAGUE CITY, Texas (KTRK) -- A 70-year-old man is trying to find a way to thank a League City police chief and an emergency medical services chief for saving his life after he went into cardiac arrest while driving his grandson to school.

It was just another typical Wednesday morning in March when League City Police Chief Gary Ratliff noticed what appeared to look like the scene of an accident on SH 96.

Ratliff said he pulled over and realized it wasn't a car accident at all.

"I saw a man sitting in the truck with his head back and his eyes narrowly opened. His chest was not moving," Ratliff said.

Smith's 13-year-old grandson, William, said he noticed something was wrong with his grandpa and was in the middle of dialing 911 when Ratliff showed up.

Ratliff said he reached inside the truck to check if Smith had a pulse, but he couldn't find one.

"That's when I knew we had to act fast," said Ratliff.

With the help of a bystander, Ratliff pulled Smith out of his truck and performed chest compressions on Smith, hoping to revive him. After a few minutes, Smith gasped for air.

That's when League City EMS Chief Gregory Kunkel showed up to the scene and offered to take over compressions while Ratliff directed traffic.

Moments later, paramedics arrived to take Smith to the hospital.

"Our EMS team is amazing. They are the real heroes," said Ratliff. "I just did what I had to do. What I do know is that it just wasn't Mr. Smith's time."

After spending a few days in the hospital, officers said Smith made a full recovery. While Smith said he has no recollection of what happened that morning, he said he knows he is lucky to be alive.

"I can't thank the chief or the League City paramedics enough for what they have done for me," he said, holding back tears. "There's nothing I can say to express my gratitude."

Smith said he plans to take a CPR class with his family, in hopes of paying it forward.

"God put us in a position to help him, and it's part of what we as first responders strive to do every day," said Ratliff.