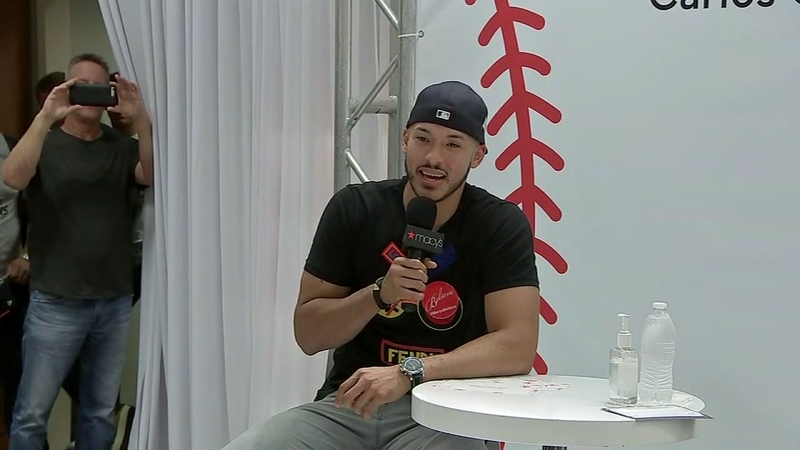 HOUSTON, Texas (KTRK) -- Apparently if you chant it, he will come.

The Macy's Galleria store was transformed into a pep rally. The crowd could be heard two floors up from the escalators as they chanted, "Correa, Correa" and "Houston Astros," while patiently waiting in lines and designated areas. Lily Beltran waited with her husband and two young sons who play baseball.

"We actually went downtown, but it was so crazy we were like never mind," she said. " He mentioned Correa was going to be here so we rushed over here before the crowd gets here. That way the boys will get a glimpse of one of their favorite players."

Two hundred fans who lined up early Friday morning got to return for a once in a lifetime picture with Astros star Carlos Correa. He was introduced and took part in a brief Q and A with an emcee, then it was time to sign some autographs and take some pictures.

It was a moment that meant the world to some of his biggest fans.

"I love him so much. Love you Correa, you're my number one," said Samantha, who got to pose for a picture with him.

Omar Carrillo said it was emotional for him as he had his picture snapped with his young nephew.

"I literally got the butterflies, I told him I literally love Carlos Correa," said Carrillo.

Correa and teammates have been like an extended baseball family to the Gooch's. Cameron, 9, is battling cancer and his Astros dreams came true through the Make-A-Wish Foundation. Perhaps he should be an honorary coach, too. He said,

"I told Springer to pull the ball," he said.

Eyewitness News Reporter Christine Dobbyn asked, "Did he listen to you?"

Cameron shook his head "yes" as those around erupted in laughter. His mother, Emmie, said of Correa, "So down to earth and sweet and we've had the same experience with so many Astros I keep saying they feel like family to us."