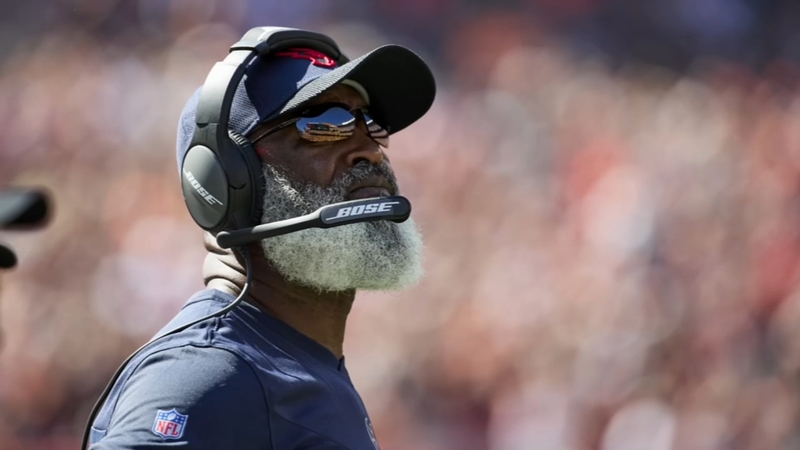 Texans set to introduce Lovie Smith as next head coach

HOUSTON, Texas (KTRK) -- Houston has another famous beard as the face of a franchise.

The Texans formally announced defensive coordinator and veteran NFL head coach Lovie Smith would take over as their fifth head coach, and on Tuesday morning, they introduced him at a press conference at NRG Stadium.

"I wanted to be a coach all my life," said Smith, who hails from the small East Texas town of Big Sandy, about 30 minutes outside of Longview.

Smith was a high school football star leading the Big Sandy Wildcats to three consecutive championships while playing defensive end and linebacker, his bio on the Texans website states.

"I'm a high school product of our great state of Texas," Smith said.

But it was his connections to the big city of Houston that he followed up his remarks on his hometown pride with on Tuesday, explaining that his 7th-grade basketball coach still happens to coach football here.

He also mentioned a college coach who lives in Houston.

Of course, everyone was gathered upstairs at NRG not to talk about Smith's past and high school background, but what he will do for the Texans and their future.

"It's our responsibility to bring the fans back and get them excited about the product we're going to put on the football field, and I guarantee you we can do that," Smith said. "The fans.... (we) cannot play winning football without you."

OK, so maybe Smith did bring the conversation back to his hometown.

"On the defensive side of the football, being able to score just like on offense. It's not a turnover. It's a takeaway," he continued.

This morning, the #Texans are introducing Lovie Smith as the franchise’s new head coach.

Smith is the second minority candidate to be hired this offseason after the Miami Dolphins hired San Francisco 49ers offensive coordinator Mike McDaniel, who is biracial, on Sunday.

Smith spent last season as Houston's associate head coach and defensive coordinator. He will take over for Culley, who is also Black, and was fired after one season.

Houston interviewed multiple candidates over the past few weeks, including Brian Flores, Hines Ward, Josh McCown and Joe Lombardi. Flores, who is Black, was fired despite posting winning records in the final two of his three seasons in Miami.

Flores sued the NFL, the Dolphins and two other teams last week over alleged racist hiring practices for coaches and general managers.

Flores issued a statement through his legal team applauding the Texans for hiring a Black man, but questioning why he wasn't offered the job.

"We would be remiss not to mention that Mr. Flores was one of three finalists for the Texans' head coach position and, after a great interview and mutual interest, it is obvious that the only reason Mr. Flores was not selected was his decision to stand up against racial inequality across the NFL," his legal team said in a statement.

Smith, who was seated next to general manager Nick Caserio, was asked about Flores' lawsuit, of which he said he didn't know enough about, but commented.

"I realize the amount of Black head coaches that are in the National Football League: Mike Tomlin and I think there's me. I don't know of many more," Smith started. "But after there's a problem, what are you (going to) do about it? There's a lot of different talk on how and what you should do. But I think it always comes down to action a little bit. And I know one person that wanted to do something about it. It's not just about the color of your skin or who you want leading a program but I know Cal and Hannah (McNair), of course, they said, 'This is a problem. This is what we're gonna do for it.'"

Smith was referencing Texans CEO Cal McNair and his wife Hannah, adding that he believes the Texans are doing something to make hiring practices better.

"Maybe it's about getting guys in a position for people to see who they are and what they can do," Smith said.

Caserio also addressed Flores' lawsuit, saying that it did not affect their decision not to hire him.

But as for the hiring decision, Caserio said the process involved "multiple conversations with multiple candidates" and that there was a conversation with Flores after the lawsuit was filed.

In the end, Caserio said, it came down to "arriving at the end point that I felt made sense for the organization."

Prior to Tuesday's press conference, the Texans raved about the qualities Smith brings to the team.

"He is one of the most respected coaches in the NFL and an established leader," Caserio said in a statement. "A proven winner, (Smith) has shown the ability to develop players both on and off the field for years. We had numerous discussions with countless coaches, executives, and players, and what revealed itself is that Lovie has both the leadership and people skills it takes to lead us forward."

The 63-year-old Smith joined the Texans last offseason after spending 2016-2020 as the coach at Illinois.

This will be the third NFL head coaching job for Smith, who coached the Chicago Bears for nine seasons and coached Tampa Bay for two seasons ending in 2015.

Now he takes over a team in the process of a complete rebuild after trading or releasing almost all of its top players in the past couple of years. The Texans went 4-13 last season in a year when star quarterback Deshaun Watson did not play after a trade request and amid 22 lawsuits alleging sexual harassment or assault.

After the hiring of Smith is complete, the Texans will continue an offseason where they are expected to finally trade Watson. They have the third overall pick in the draft after not having a first-round pick since 2019, and could acquire more high draft picks if they're able to trade Watson.

"I have so many friends, family, teammates and coaches to thank for supporting me and helping me continue to do what I love, which is teaching and developing players," Smith said in a statement on Monday. "I understand the responsibility I have to this organization and this city to develop a championship-level program. I'm ready to get to work and build it together."

Smith was 144-81 with the Bears, leading them to the Super Bowl in the 2006 season where they lost to the Colts. He struggled in his stint with Tampa Bay, going 2-14 in his first season and 6-10 the following year before being let go.

Smith went 17-39 at Illinois before being fired with one regular-season game left in his fifth season. The Texas native began his coaching career at his alma mater as the defensive coordinator for his Big Sandy High School team in 1980 before moving on to college coaching in 1983.

His first NFL job came in 1996 when he was hired to coach linebackers for the Buccaneers.

Smith was inducted into the Texas High School Football Hall of Fame in 2017.