Kyle Allen: What to know about A&M and UH alum-turned-NFL starter 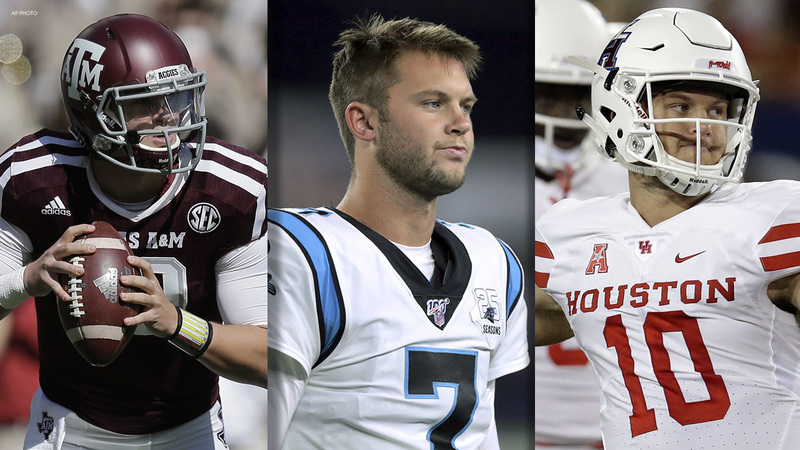 Kyle Allen: What to know about UH alum and NFL pro

Kyle Allen's journey to the NFL as a quarterback was one that began in Aggieland but weaved through Houston.

Highly-touted out of high school in Arizona, Allen, 23, is set to make his third ever start under center when his Carolina Panthers travel to NRG Stadium and take on the Houston Texans on Sunday.

It's a homecoming for Allen, who matriculated at University of Houston from 2016 to 2018. Before landing with the Cougars, though, he committed to play at Texas A&M.

While he began his freshman year with the Aggies in 2014 as the backup, Allen ascended to the starter role mid-season. In the following season as a sophomore, he remained the starter, kicking off the year 5-0, before a disastrous game against Alabama shifted the focus on a future No. 1 overall pick, Kyler Murray.

After riding the bench, he transferred to UH, sat out a year, and then began the 2017 season as the starting QB. He was replaced in that role mid-season.

Allen declared for the 2018 NFL Draft, but wasn't selected. He was signed by Carolina before the 2018 season, able to win a job on the active roster.

After star QB Cam Newton went down late in the 2018 season, Allen moved up in the depth chart, and on Dec. 23, 2018, made his regular season debut against Atlanta.

The following week, Allen made his first NFL start, leading the Panthers to a 33-14 win over the playoff-bound New Orleans Saints.

Taking over again for an injured Newton as the primary backup, Allen debuted in 2019 during Carolina's Week 3 contest against former teammate Murray and his Arizona Cardinals. Allen threw for four touchdowns in a win over his home state team.

Thank you to everyone who has helped me get to this point! Excited to see what God has in store for me 🙏🏼 pic.twitter.com/upez57T0cK