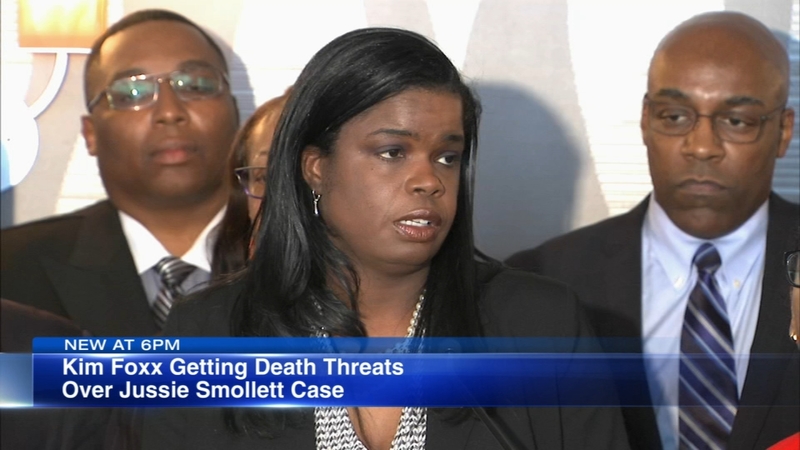 A statement from the Cook County State's Attorney's Office said, "We can confirm that the State's Attorney has received threats to her personal safety and security, a number of which have contained racially charged language."

Charges against Smollett were dropped on March 26, almost two months after the actor reported being attacked by two men in the city's Streeterville neighborhood, who he alleged yelled racist and homophobic slurs and poured a chemical on it, as well as looping a noose-like rope around his neck.

Smollett was indicted by a grand jury on 16 counts of disorderly conduct for filing a false police report. Chicago police said Smollett staged the attack with the help of the Osundairo brothers, who he knew through "Empire," and paid them. They said the injuries Smollett sustained were self-inflicted.

Last week, texts obtained by the ABC7 I-Team showed Foxx thought the number of charges filed against Smollett were excessive. Foxx had recused herself from the case because she had conversations with Smollett's family before police announced they believed he had staged his attack.

First Assistant State's Attorney Joe Magats dropped the charges in exchange for community service and forfeiture of his $10,000 bond payment. The City of Chicago is suing Smollett for the cost of the investigation, a total of more than $130,000.

"Given that he doesn't feel any sense of contrition and remorse, my recommendation is that when he writes the check, in the memo section, he can put the words, 'I'm accountable for the hoax,'" Mayor Rahm Emanuel said several weeks ago.

Emanuel said he believes Smollett not only cost the city financially, but also damaged Chicago's reputation of being a place that welcomes people of all walks of life.

Smollett has maintained his innocence.