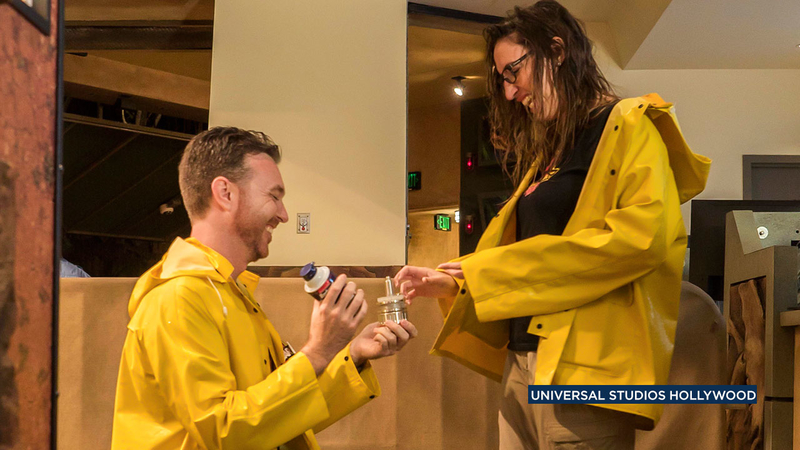 After the record-breaking run came a surprise: an engagement proposal, complete with an amber ring.

The couple, identified only as Devin and Chelsea from Los Angeles, set out to break the record of 60 rides in one day of "Jurassic Park - The Ride."

They were taking aim at the record just as the ride itself is set to close as of Sept. 3 - to be replaced by an upgraded "Jurassic World" ride in 2019.

Video shot that day shows them boarding the water-based ride, again and again, seeming to enjoy themselves every time they splashed and plunged down the 84-foot drop.

Then after record-breaking run #61, Chelsea got the surprise of her life.

On the photo taken during the ride, Devin had opened up his jacket for the camera, displaying a t-shirt that read: "Chelsea Will You Marry Me?"

He took out a Barbasol can movie prop, and revealed the amber ring inside.

They took one more ride, bringing the record to 62.

This time, in the ride photo Chelsea's t-shirt said "Yes!! It also happened to be Chelsea's birthday.

Devin and Chelsea rode the "Jurassic Park" ride at Universal Studios Hollywood for 13 hours before getting engaged.