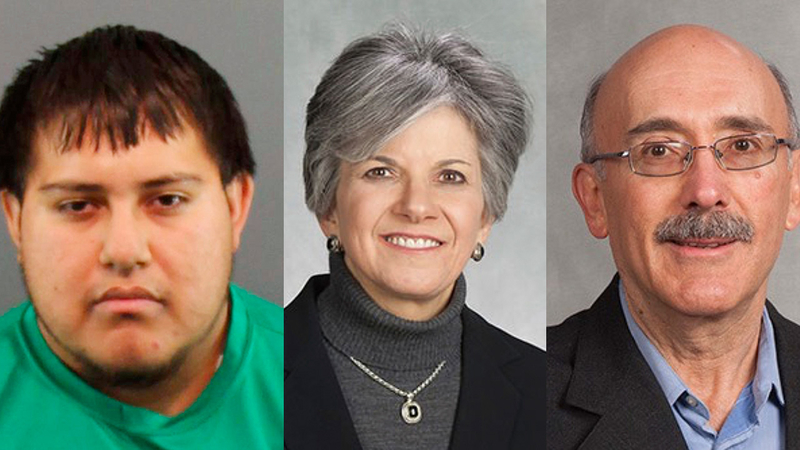 Professor and Husband stabbed to death by son

PEORIA, Illinois -- Two bodies found in a river in central Illinois were identified as those of a Bradley professor and her husband, authorities announced Tuesday night.

Peoria County Coroner Jamie Harwood said the bodies of Susan Brill de Ramirez and Antonio Ramirez Barron were recovered Tuesday from the Spoon River. The bodies, Harwood said, were found in the water and resting up against a river bank.

The Peoria County Sheriff's Office began its search after charging the couple's 21-year-old son, Jose Ramirez, in their deaths. Crews focused on streams near the Henry County community of Annawan, where Ramirez told investigators he dumped the bodies from a bridge, Peoria County Sheriff Brian Asbell said.

Ramirez was arrested Monday on first-degree murder charges after police said he confessed to killing his parents. Late Sunday, Asbell said a relative called authorities to the couple's home near Peoria, where deputies found blood and signs of a struggle.

The couple, both 63, last reported to work Thursday at Bradley University in Peoria, where Brill de Ramirez was an English professor and Ramirez Barron worked in the school's information technology department.

The search area was broad because Jose Ramirez was unfamiliar with the area about 40 miles (65 kilometers) northwest of his parents' home and couldn't give investigators an exact spot where he took the bodies, Asbell said.

Peoria County Assistant State's Attorney Dave Kenny alleged Tuesday during a bond hearing that Ramirez told friends he was "sick of his parents" and killed them on Friday.

Prosecutors alleged that Ramirez waited until his parents were sleeping and then went into their bedroom. He used pepper spray as a distraction and then stabbed his father in the stomach and neck, Kenny said.

He stabbed his mother when she woke up, Kenny said. Ramirez then wrapped the bodies in a tarp and a tent, put them in his father's SUV and dumped them in a waterway.

Judge Sean Donahue set bond for Ramirez at $3 million and a preliminary hearing date of Nov. 29.

Matthew Roberts, 21, is charged with obstruction of justice and concealment of a homicidal death. Asbell said investigators didn't have evidence that Roberts was involved in the killings or dumping of the bodies, but believed he knew his friend, Ramirez, had done so. Court records on Tuesday didn't list defense attorneys for either Ramirez or Roberts.
Report a correction or typo
Related topics:
illinoismurdercollegeu.s. & worlddouble murder
Copyright © 2022 by The Associated Press. All Rights Reserved.
TOP STORIES
Coast Guard suspends search for Houston woman off Alaska coast
Child left alone starts E. Houston apartment fire
The Railroad Killer
10-month-old girl left in hot car for 'several' hours, HPD says
Known white supremacist threatening armed standoff at Texas Capitol
Katy ISD employee's husband accused of stabbing wife to death
Judge: COVID-19 asylum restrictions must continue on US-Mexico border
Show More
Track your fitness with an app? Doctors wary about certain ones
Your chance of rain is going up this weekend
Harris County Election Day process under fire by Republican Party
Woman stopped at US border with condom-wrapped fentanyl
Parents reminded they're 'rolling the dice' on kids without COVID shot
More TOP STORIES News