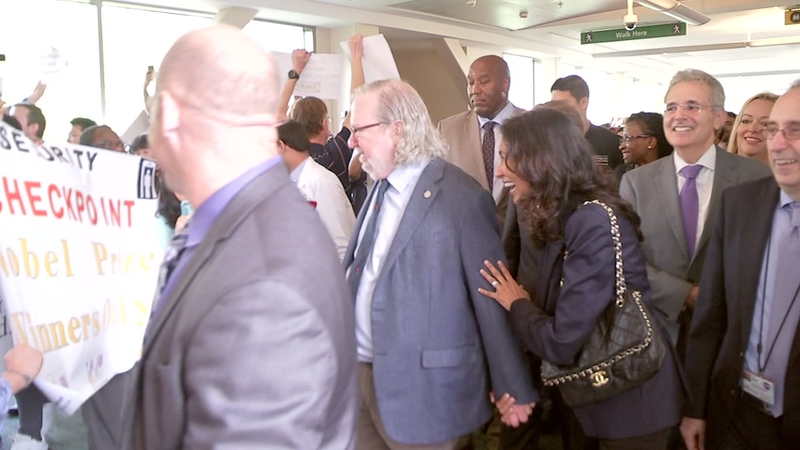 HOUSTON, Texas -- It was a rock star greeting at work this morning for Dr. Jim Allison at MD Anderson's Cancer Center in the Texas Medical Center.

Thousands of employees lined the halls for a parade to congratulate Allison on his recently awarded Nobel Prize.

Led by the Lamar High School drumline, Allison along with his wife were surrounded by adoring colleagues screaming, cheering and reaching out for handshakes and selfies.

"My first comment is wow! I'm overwhelmed by the level of support and happiness," said Allison after he was escorted into a private room to speak with media.

Allison, chair of Immunology and executive director of the immunotherapy platform at The University of Texas MD Anderson Cancer Center, was awarded the 2018 Nobel Prize in Physiology or Medicine for launching an effective new way to attack cancer by treating the immune system rather than the tumor.

"By stimulating the ability of our immune system to attack tumor cells, this year's Nobel Prize laureates have established an entirely new principle for cancer therapy," the Nobel Assembly of Karolinska Institute in Stockholm noted in announcing the award to Allison and Tasuku Honjo, M.D., Ph.D., of Kyoto University in Japan.

The award recognizes Allison's discoveries on the biology of T cells and his invention of immune checkpoint blockade to treat cancer. Allison's work led to the development of the first immune checkpoint inhibitor drug, which was the first treatment of its kind to extend the survival of patients with late-stage melanoma. Subsequent research has extended this approach to new immune regulatory targets in certain cancer types and stages, including melanoma, lung, kidney, bladder, gastric, liver, cervical, colorectal, and head and neck cancers and Hodgkin lymphoma.