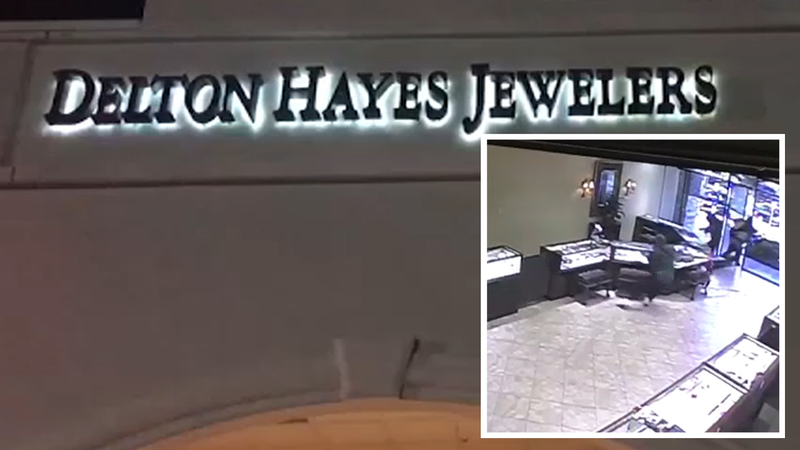 Owner shoots alleged robbers who broke into his jewelry store

ATASCOCITA, Texas (KTRK) -- Delton Hayes looked out on the showroom of his jewelry store that was transformed in a matter of seconds by a 4 person robbery crew.

In the end, the store owner got the last laugh, despite the damage.

Mid-afternoon, a man tugged at the front door of the store, which is controlled by a security buzzer.

"I'm the one who buzzed him in," said employee Deana Henson. "When he opened the door, and stuck his foot there, and was on the phone, I knew something was wrong."

Moments later, four robbers masked with bandanas rushed the store and hammered away at the glass showcase.

What they didn't know was that Hayes was watching from the office, behind a one-way mirror.

"They were smashing the cases, but they stopped as soon as I started shooting," he said.

Surveillance video shows them entering, reaching into the jewelry case, and then running for their lives out the door.

@HCSOTexas units responded to an armed robbery of a business at 6460 E. FM 1960. Four males robbed the business. Its believed the owner was able to fire his own handgun at the suspects. All males fled in a car. Due to the swift actions by @HCSOTexas units, some suspects arrested. pic.twitter.com/UqLqJfT7ay

Hayes later learned two of them had been wounded.

"One was shot in the hand, according to a deputy. I shot the other one in the butt," he said.

The robbers were arrested later at an apartment complex in Channelview, near Uvalde and I-10. Inside the getaway car, jewelry and drugs were recovered.

"The deputies brought the jewelry back to me, and it wasn't ours, which means somebody else was hit," he said. "They managed to get one ring from my store, but they dropped it in the parking lot, and it was recovered."

All four robbers were described as young. One believed to be 17, but may still be charged as an adult.