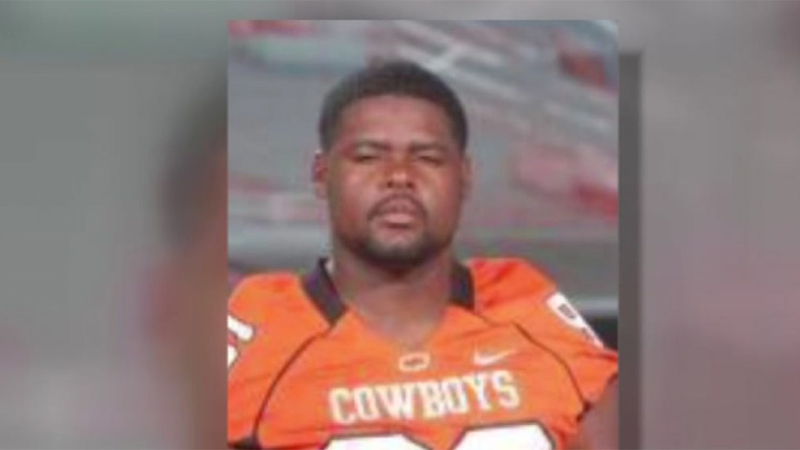 HOUSTON (KTRK) -- The family of former Oklahoma State University football player Jeray Chatham is shocked after he was shot and killed by a Harris County deputy.

"The guy started to back up little by little and the cop started coming towards him," said witness Angel Cisneros. "The guy turned around and started taking off. Cop ran towards him, they were coming my way."

Chatham grew up in Spring. He graduated from Westfield High School and got a full scholarship to Oklahoma State, where he was a defensive team captain.

His criminal record is spotless until February of this year. That's when family says he and his girlfriend of eight years broke up.

In August, he was arrested again, accused of trespassing on her property.

Each time he was released on bond.

On Tuesday, deputies say the same ex-girlfriend called in, saying Chatham was following her.

"Emotions got caught up in somebody he really loved and truly loved," said his father, Ray Chatham. "Just couldn't walk away from her."

Deputies say Chatham ran from them, stripped down to his underwear, and then lunged at a deputy.

Claiming to fear for his life, a deputy, who HSCO hasn't identified yet, shot Chatham twice.

"How is running away causing him to fear for his life?" asked Ray Chatham. "Somebody has to explain that to me."

"You don't ever expect this will happen to your family," said his sister, Sheneice Segobin. "You see it on the news and everybody can make comments, but my brother is not no thug."
Related topics:
harris countydeputy involved shooting
Copyright © 2022 KTRK-TV. All Rights Reserved.
RELATED
HCSO: Suspect shot twice, killed after lunging at deputy
TOP STORIES
No bond granted for suspect in Pct. 5 corporal ambush killing
Bodies found in back seat and trunk of burning vehicle in Liberty Co.
Attorney of man questioned in dad's death wants him to seek help
Houston greenlights plan to help homeless find housing
EPA announces cleanup plans to address Fifth Ward cancer cluster
Investigation underway in pregnant woman shooting
Search underway for suspect in Texas City double shooting
Show More
New Buffalo Speedway bridge opens over Brays Bayou
ABC13 sits down with 3 of 5 Democrats looking to unseat AG Ken Paxton
You could get paid to get your COVID vaccine or booster
Man who sold weapon to Colleyville synagogue standoff suspect charged
C. Baldwin Hotel announces downtown watch party for The Bachelor
More TOP STORIES News