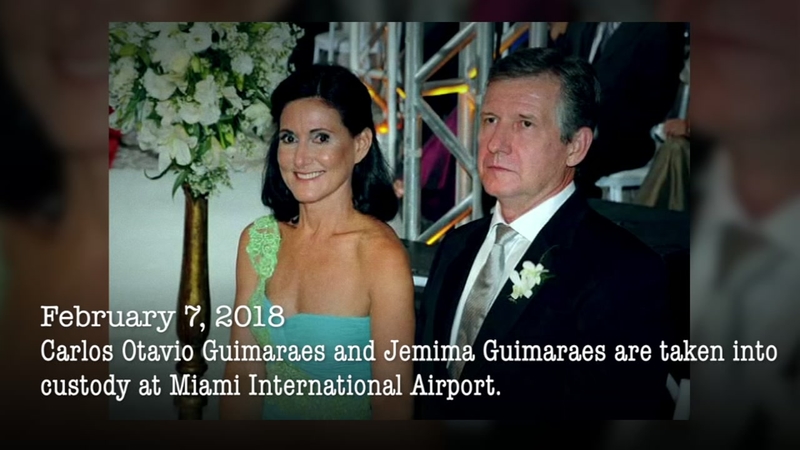 HOUSTON, Texas (KTRK) -- A Brazilian couple has been sentenced to prison for helping their daughter kidnap their young grandson from Houston.

Carlos Otavio Guimaraes and Jemima Guimaraes were found guilty of international kidnapping back in May. They were accused of helping their daughter, Marcelle Guimaraes, secure a job abroad and enroll her son Nico in a Brazilian school as part of a plan to relocate the boy permanently to Brazil.

For now, they remain free on bond until mid-January, when they will be expected to turn themselves in.

When determining punishment, the judge took into consideration the fact the couple has been under home confinement and earlier spent a month in custody. But they will serve their full sentence as named in the federal court. The sentence is much lighter than the 21-month sentence prosecutors asked for.

"The judge has a tough job in these situations and did the best he could with the information he had before him," Houston Dr. Chris Brann, the child's father, said. "Ultimately, from my point of view, I have been deprived of my child for the last five years, and the same family is going to deprive me for the next 10 years."

During a Skype interview from Brazil, Marcelle Guimaraes responded to the accusations about her.

"I made my own decisions. I'm the one that controls my life," Guimaraes said. "I don't really understand why they have to stay in prison, and why this is happening to my family."

Guimaraes also told Eyewitness News that her ex-husband could travel to Brazil and visit their son at anytime. In court Wednesday, Brann says he would be arrested if he went to Brazil because the country's court has ruled that he owes his ex-wife in back child support.

An attorney for the Guimaraeses alleged that Brann assaulted his wife during their marriage. Fearing more domestic violence, she fled to Brazil with their son. The grandparents' attorneys maintained throughout the trial that they were just supporting their daughter.

"The fact is, these people were supporting their daughter. Evidence doesn't contradict that she was the victim of domestic violence and that's the defense," said attorney Rusty Hardin.

Brann married Marcelle Guimaraes in 2008. Their son Nicolas was born a year later.

In 2012, Marcelle filed for divorce. The couple then shared custody of Nicolas for several months.

In 2013, Brann claimed that his ex-wife used a family wedding as a reason to let their son Nicolas travel to Brazil. Nicolas was three years old at the time.

According to a criminal complaint, Marcelle was supposed to take Nicolas to Brazil July 2 and return to Houston no later than July 20, 2013. When Marcelle never returned, Brann filed criminal charges against his ex-wife and her parents.

The Guimaraeses were arrested this spring when they returned to the U.S. to attend another grandchild's birthday party. Marcelle and Nico have always remained in Brazil, and out of reach of U.S. prosecutors.

A split verdict has been reached in the federal court trial of a Brazilian couple accused of helping their daughter kidnap their now 8-year-old grandson from Houston.