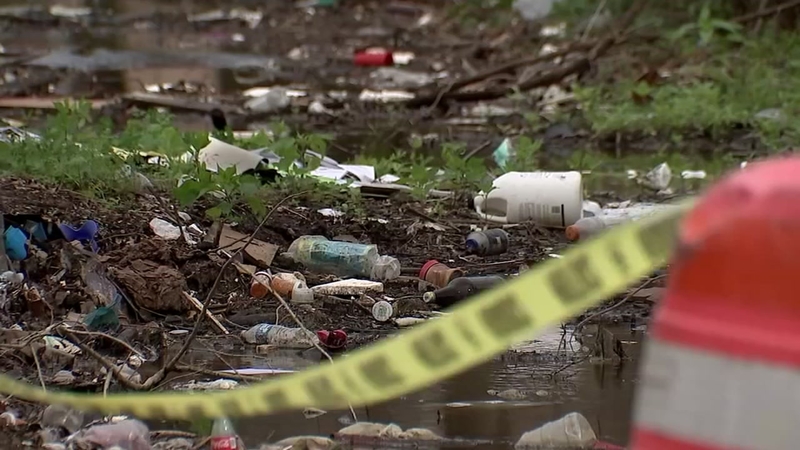 HOUSTON, Texas (KTRK) -- In the middle of an April day, two men pull to the side of a Houston road. They both get out and look around.

As a trash truck approaches, one puts his phone up to his ear. After that, the coast is clear, and the men start dumping what's in the back of their red pickup truck.

There are bags of trash, pallets of wood and scraps of metal thrown into a pile at the side of the road.

In another case, a driver unloads three mattresses in less than 30 seconds. And in a third case, in what could be considered a "dumping drive by," the driver of a truck barely stops as the passenger gets out and throws stuff from the tailgate in 12 seconds.

Sandra Flowers leads the Greater Fifth Ward Stakeholder Partnerships.
She said,"I can attest to Fifth Ward, I think it's one of the go-to spots," Flowers said. "We're living here among this travesty and it's not good for us. Our health, our mental stability, and our overall quality of life."

Lt. Randy Scales with Harris County Precinct 1 Constables Office oversees environmental cases. He showed us a remote dumping "hot spot" that has become very deserted after many homeowners took flood buyouts.
"Yes, more isolated areas but we also see it in the neighborhoods on vacant lots where the neighbors think that's the best place to take it, instead of leaving it in front of their house. It just takes one person to add to that pile and then everybody else thinks they need to 'add to that pile," said Lt. Scales.

While Eyewitness News was at one of the dump sites with the lieutenant, neighbors stopped by to share their complaints.

Harris County Precinct 1 Constable Al Rosen says they are watching with an elaborate countywide system. The past three years they've made about 500 arrests but he added they must catch the "dumpers" in the act.
"The cameras are a game changer. The district attorney's office requires us to have camera evidence in order to prosecute these cases. Without them, we would not be able to prosecute these cases effectively," said Constable Rosen.

An illegal dumping charge can range from a misdemeanor to a felony based on how much is dumped. Rosen says as part of their punishment, he fully supports forcing the perpetrators to go back and reverse the damage they've done.

"Call us and let us know that there is an illegal dumping problem in your neighborhood, and we will come out and assess it and see what needs to be done from a law enforcement perspective," said Constable Rosen.