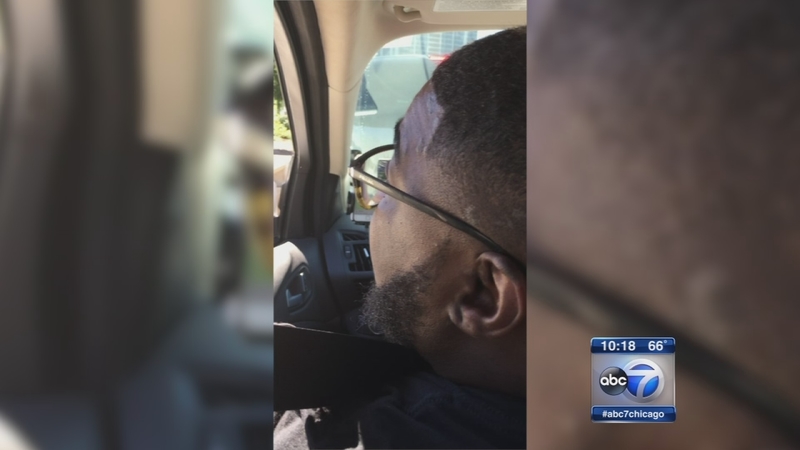 CHICAGO -- A dispute was caught on video between an Uber driver and a passenger. The female passenger also claims she was attacked by the male driver, who has been removed from the Uber platform.

Smartphone video showed that the Uber driver was trying to force a young woman out of his car. She said he wanted her to get out at an unsafe location. When she refused, she screaming started and the passenger told police the argument eventually became violent.

Jovan, who doesn't want her last name used for safety reasons, said she started recording on July 9 on her smartphone, when her Uber driver passed her destination, which she entered in the app.

The driver then demanded she get out Lakeshore Drive and then again on North Avenue, according to Jovan. She said there was no safe place to exit the vehicle and the driver wanted to pick up another customer.

"Well I'm going to pick up Kristen so I don't know where you are going," the driver was heard saying in the video.

"It's fine, it's fine and you're going to let me off at a sidewalk where there is pedestrians," Jovan said.

"You could have been out 10 minutes ago. What you talking about?" the driver said.

"No I'm not getting out because there is no sidewalk," Jovan said.

"You missed about 10 sidewalks," the driver said.

In the video, you can hear the driver, Tristian Storms, blaming Jovan.

"Get off the phone. Pay attention to what you're doing," the driver said.

Throughout the video, you can hear the driver and passenger continuing to argue. Eventually Jovan stopped rolling, to call 911. The ABC 7 I-Team confirmed the call exists but the Office of Emergency Management won't release it and said the incident is under investigation.

But Jovan said when she hung up, her phone was snatched.

"It was the moment that he snatched the phone out of my hand, threw it across the road and it shattered," she said

The video was already saved to the Cloud.

"I thought I was going to lose my life. He began grabbing my arms aggressively. He started to kick me over and over violently in my knees," she said.

Jovan showed the I-Team the scars on her knees and other pictures of injuries and scratches she said resulted from a physical attack.

According to the police report, Jovan was pulled out of the vehicle and the offender slammed the car door on the victim's legs several times.

After the incident, Jovan went to the emergency room. Her attorney provided a medical report.

"Was diagnosed with trauma physical trauma now unfortunately she is suffering from emotional trauma she has been diagnosed with post-traumatic stress disorder. She is very fearful she can't sleep at night," Jim Navarre, her attorney, said.

Navarre said he's planning to file a lawsuit against Uber.

"This gentleman wasn't prosecuted or convicted for the attack," she said.

The I-Team asked Chicago police the same question and a police spokesperson claims detectives had trouble getting a hold of Jovan but she said she never heard from anyone.

Police said they will now view the video and potentially issue a warrant.

Uber said they watched the footage and yanked Storms off the platform the day of the incident.

Storms agreed to meet in the ABC 7 lobby to watch the video but when the I-Team went to play it for him, he sprinted away.

But in an e mail, he said, "My attorney and I was not made aware of this alleged video, nor have we had the proper time to assess it for its authenticity."

Jovan said she is still afraid to get into an Uber.

"It was the worst thing I've ever encountered," she said.

Uber said it has a dedicated "incident response team" to answer any urgent issues and they will immediately suspend a driver while they investigate serious allegations.

If you use ride sharing you can look at the driver's rating on the app before getting in the car. That may give you some guidance.

Uber provides a list of information on driver/rider safety as well as a link to Uber community guidelines.

- After every ride, you and your drivers are asked to rate each other and provide feedback. Our safety team reviews this information and investigates any issues.

- During the ride, you can see the route on the map in the app. The location is clearly marked so you know where you are on your journey-and if you are on the right route.

- When a driver accepts your request, you see his or her first name, photo, and license plate number. You can also check whether others have had a good experience with him or her. In addition, the driver can see your first name and rating. You can contact the driver-and vice versa- through the app if there is any confusion around pick-up details.

- We have a dedicated Incident Response Team to answer any more urgent issues. If we receive a report that a driver or rider has acted dangerously or inappropriately, we can suspend their account, preventing him or her from accessing the platform while we investigate.