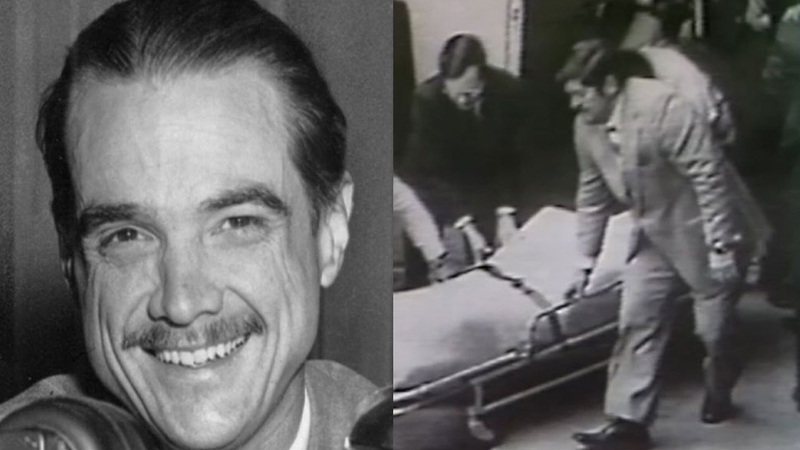 HOUSTON, Texas (KTRK) -- It was April 5, 1976 when recluse billionaire Howard Hughes was en route from his penthouse in Acapulco to Methodist Hospital in Houston when he died of renal failure.

Hughes had captured the attention of the American public in his early days as a rich, dashing movie-maker and aviator. He was Houston's most famous citizen and when word spread that he had died and was at the Harris County morgue, reporters and photographers, including those from ABC13, began flocking to the Medical Examiner's office to try confirm the death of the eccentric tycoon.

Doug Tisdale, the photographer for KTRK-TV, ABC13 recounts what happened that day:

I was a young news photographer at this time in 1976. The Assignments Editor called me to the desk to tell me that a reporter (Dana Milligan) and I were headed to the morgue. He had gotten a tip that Howard Hughes' body was there, and he wanted us to confirm and get an interview with Dr. Joseph Jachimczyk. We got there and we ran into Dr. Joe in the hallway. I had a big camera on my shoulder and the reporter had her note pad. He confirmed Hughes' body was there and told us to follow him. We went into another room and stopped at a set of double doors. Dr. Joe said "No cameras," and with his foot, pushed one of the doors open.

We looked in but all we could see was the body of an old man with long silver hair, on a table across the room, half covered with a sheet. We only had seconds to look around the room for Hughes' body before the door slowly closed. The reporter asked where Hughes' body was, and Dr. Joe just smiled. The old man with the long silver hair was Hughes. With the few seconds we had to look into the room, we had no idea that was him. The only images we had in our minds were those from photos of a dashing young Howard Hughes. We went back out into the hallway, got our interview with Dr. Joe and headed back to Channel 13 with our story.

Later, there were sketches of Hughes with long hair and a wrinkled face used in news stories and documentaries. In my recollection, those sketches were accurate, of the man I had seen through the gap of a slowly closing door.

ABC13 archive video of the coverage of Howard Hughes' death

The man who was at one time known as a high-flying, movie star dating, billionaire playboy was born in Houston on Christmas Eve 1905.

Hughes had a short marriage and then moved to California, where the rich playboy dated movie stars like Lana Turner, Katherine Hepburn and Ava Gardner.

Hughes cut a check for $24 million to buy RKO movie studios and got into the movie making business. Hughes became fascinated with aviation. He learned to fly and set a cross-country speed record in 1935 and a three-day around the world flight record in 1938.

Hughes began to drop out of public view in the 70's, even refusing to make court appearances in legal battles over his controlling interest in TWA airlines.