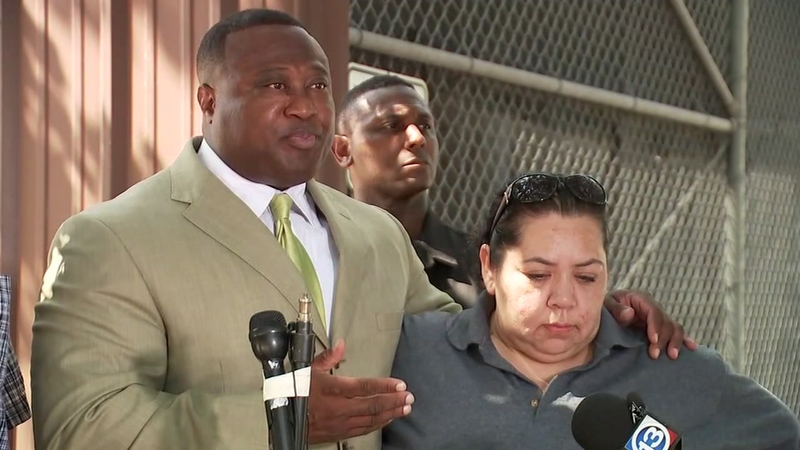 JASPER, Texas (KTRK) -- A Houston woman is accusing a prison guard of sexual assault and says that it happened more than once.

She also says she has a video to prove it, and now a community is demanding answers.

The secretly-recorded cell phone video shows Sylvia Hildago sitting in her car. Then you see an arm reach in. We blurred the act, but it shows a man fondling Hildago's chest.

The 47 year-old woman was there visiting her fiancé. She says this wasn't her first run in with the officer.

"The first time he searched my car and I got back in the vehicle, and then he just politely rubbed on my breast with no indication that I allowed him to do that. I was in total shock," she said.

Hildago says she came back to the prison in September.

"I went to visit and came back and he did it again," she explained.

But this time, Hildago says she was prepared, hiding her cell phone by the brake and recording.

"You can see in the video she was assaulted by perverted TDCJ correctional officer who did what he wanted to do to her, because she was afraid and he threatened her for the safety and security of her fiancé," said activist Quanell X.

Hildago reported the incident to TDCJ, turned over the video and did a photo lineup. When asked about the incident, TDCJ told Eyewitness News:

"When an allegation of official oppression was presented to TDCJ last year a disciplinary investigation began. When presented with the allegation Joe Cunningham resigned his position as a Correctional Officer. All information that had been gathered at that point was passed to the independent Office of Inspector General for criminal investigation."

The investigation is still open and ongoing.

"We want to know what's taking the OIG's office so long to move this case forward to fully prosecute when this happen in September 2017. She did her best to tell what was happening, but initially they treated her like she was a suspect and not a victim," Quanell X said.