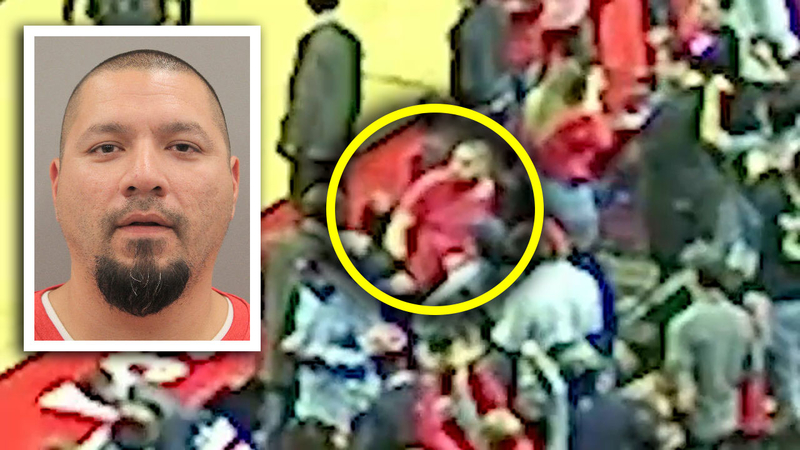 HOUSTON, Texas (KTRK) -- Just as the Houston Rockets wrapped up their win against the New Orleans Pelicans last weekend, a fan took a swing at an assistant coach at courtside, hitting the assistant in the head.

"The Rockets won the game. Then one of the assistant coaches for the New Orleans Pelicans was gathering his things and was essentially cold-cocked or blindsided and struck in the face, brutally in my view," said Nathan Beedle with the Harris County District Attorney's Office.

The fan in the red shirt then turns around and tries to leave through the crowd.

Manuel Garcia, 38, was arrested and charged with misdemeanor assault. He is suspected of punching Joe Boylan. Garcia's girlfriend, Brittney Aplin, 33, was also arrested for allegedly preventing police from getting to Garcia.

Garcia was on probation for an unrelated crime at the time of the alleged incident.

"Clearly, we are going to take this extremely seriously. He is a convicted felon on probation right now charged with a Class A assault of a defenseless person in the case," said Beedle.
The Rockets have since banned the fan for life.

On Monday, the Pelicans issued a statement, saying: "We are aware of this incident but will have no further comment."

Also on Monday, Beedle said he won't speculate on a motive but added, "We will get to the bottom of this and hold them both accountable for their actions."

Court records didn't list attorneys for Garcia or his girlfriend.

The incident came after an Astros fan was arrested after allegedly slapping a Yankees fan during the American League Championship Series this month in Houston.

Information from The Associated Press and ESPN was used in this report.

The victim spoke to ABC13's Miya Shay, recalling what happened during that confrontation.