Ukraine invasion is complicating US-Russia relations not just on Earth, but 250 miles in space 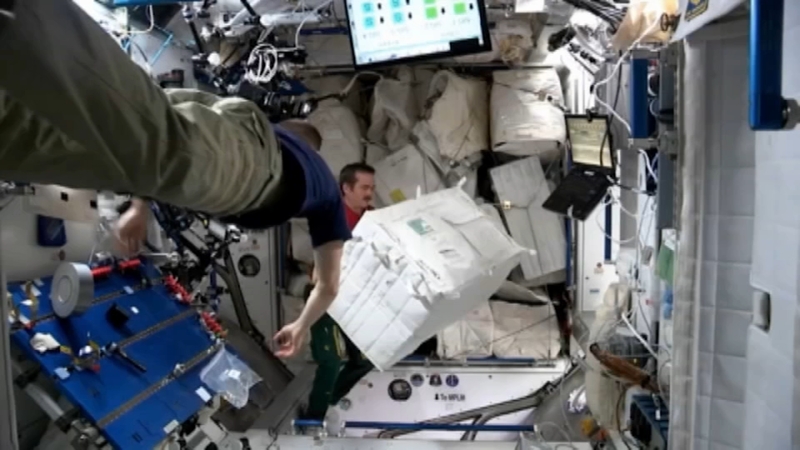 ISS works with Russian cosmonauts, where their relationship stands

HOUSTON, Texas (KTRK) -- What's happening in Ukraine isn't only complicating things between Russia and the US on earth, but it could impact what's happening 250 miles above ground.

WHILE RELATIONS ARE STRAINED ON EARTH, POLITICS USUALLY STAYS OUT OF WHAT HAPPENS IN SPACE

Right now, there are American astronauts and Russian cosmonauts in space aboard the International Space Station, which is controlled at the Johnson Space Center in Houston. For more than 20 years, the two countries have worked together with it.

Former NASA astronaut, Clayton Anderson was a part of the collaboration. He spent time on the ISS with cosmonauts.

"We were space brothers," Anderson recalled. "We were the three musketeers in orbit, according to the Russians. That's what they used to call us."

Anderson isn't aware of what conversations are taking place after Russia invaded Ukraine and the U.S. imposed sanctions, but he believes the ISS crewmembers can't avoid it.

"I have no idea what the Russian control center will be calling up to their cosmonauts, and what they'll be saying to them," Anderson explained. "They'll be able to get the news just like American astronauts are. So, I'm sure they're well aware of what's going on."

Despite the tension, Anderson doesn't think it'll impact what happens on the spacecraft.

"I would have to believe all the astronauts and cosmonauts continue to work together," Anderson said. "Continue to do the right thing, and try and remain above, good idea right, 250 miles up, they remain above all this. At least for now."

When ABC13 asked NASA what impact the invasion could have on collaboration, a spokesperson sent the following statement:

"NASA continues working with all our international partners, including the State Space Corporation Roscosmos, for the ongoing safe operations of the International Space Station. The new export control measures will continue to allow U.S.-Russia civil space cooperation. No changes are planned to the agency's support for ongoing in orbit and ground station operations."

NASAwatch.com editor, Keith Cowing isn't surprised NASA isn't saying too much at this point. "Why isn't NASA talking right now? They probably don't have cogent answers to give you other than, 'Yeah, we're scared and B, we don't know what's going to happen,'" Cowing explained.

In a series of tweets, the head of the Russian space agency, Dmitry Rogozin said sanctions could lead to the destruction of the ISS, "If you block cooperation with us who will save the ISS from an unguided de-orbit to impact on the territory of the US or Europe," he said.

Rogozin also appeared to take aim at President Joe Biden, "I suggest that you not behave like an irresponsible gamer and disavow the 'Alzheimer's Sanctions.' Friendly advice," he said.

Cowing said he's never seen anything like the Russian leader's response to the sanctions.

"I saw the first tweet and it said Alzheimer's, and I thought 'Is that a typo? No, he said Alzheimer's,'" Cowing recalled. "I cannot fathom anybody heading any space agency, American or otherwise, ever, ever talking about that about anybody about anything."

DESPITE PROGRESS IN PRIVATE SPACE, THE U.S. RELIES ON RUSSIA FOR SPACE EXPLORATION

Two years ago, SpaceX brought its first astronauts to the ISS. Since then, NASA has contracted with the private space company to complete more crewed missions. However, NASA still relies on Russia.

"Will we ever totally get rid of the United States paying the Russians on a Soyuz? I don't know," Anderson said. "We're getting closer, and closer, but part of this is Russia needs the U.S. money for their space program to survive."

NASA astronaut Mark T Vande Hei is supposed to return to earth in April, not by SpaceX, but by Soyuz. The capsule is scheduled to land in Kazakhstan.

Anderson said if it was his return trip, he'd be paying attention to what's happening on Earth.

"I'd probably look at a map and see how far away it was from Ukraine, but it's all about trust," Anderson said.

For the U.S. it's not just about trust, but Russia too, which relies heavily on America for its space program. However, insiders aren't sure what may happen if things get worse on Earth.

"Whether we're going to do further stuff where we fly a cosmonaut on a SpaceX mission, events need to work out for that," Cowing explained.

Ukraine's capital under threat as Russia presses invasion; US to freeze Putin's assets

What the Russia and Ukraine conflict means for Houston