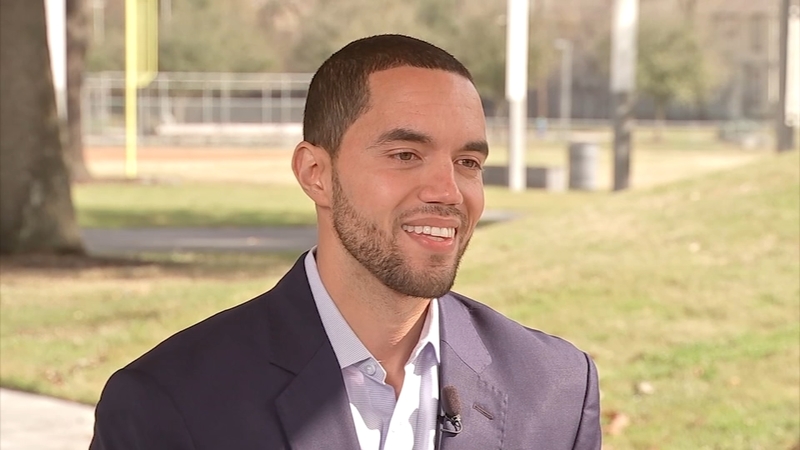 Chris Hollins is running for Houston's mayor in 2023

HOUSTON, Texas (KTRK) -- The former Harris County Clerk who set up drive-through polling and overnight voting hours has filed to run for mayor of Houston in 2023.

Chris Hollins filed the paperwork Monday to replace Mayor Sylvester Turner, who is term-limited from running for office again. Hollins was appointed to the county clerkship position so this will be his first time running for a city or countywide position.

When ABC13 anchor Gina Gaston interviewed Hollins with his family in Third Ward after the 2020 election, he hinted at a future in politics, but on Monday Hollins made his future plans official.

"My entire career I've been a problem solver," said Hollins. "(I have) pioneering ideas and strategies for large government agencies and advising multinational companies on how to achieve better results for the people that they serve. And I brought all of that experience with me to the County Clerk's Office and certainly look forward to bringing it to bear as the next mayor of Houston."

Follow along as we take you into the world of Chris Hollins and his family following his transformational job as Harris County clerk during one of the biggest elections in history.

Hollins says public safety will be the central issue in his campaign, including our safety from natural disasters and their aftermath -- flooding and electricity reliability. But at a time when we're seeing record-setting numbers of homicides, and our law enforcement officers are under siege, he has a perspective shaped by real-life experiences.

"I do come from a police family," Hollins said. "My father served for 34 years. My uncle just retired after 33 years with HPD. And today, both of my sisters are married to HFD firefighters. And so I certainly appreciate what it takes to keep our community safe. And I think that our public safety officers should be well paid. And we have to make those jobs more attractive to bring people in. But we also have to make sure that we're being protected and served as a community. And so it's not about writing a blank check to HPD or to any other agency."

Hollins grew up in Missouri City, and his parents say he's loved politics since childhood. He and his wife Morgan are both lawyers -- Ivy League educated -- and raising two young children. Their son is 18-month-old George, and they have a 5-year-old daughter, Vivian.

Hollins would be a new generation of leadership. But he'll have to defeat what will certainly be a crowded field, including Texas State Senator John Whitmire who has almost 50 years of statewide service and an estimated $11 million election stash.

He explained, "Whether you're 35 or whether you're 75, you have to ask folks that same questions: Do you have executive experience? How do you ever manage a large budget? Have you ever managed a staff of people numbering in the thousands? Whereas, you know, a senate staff might be five to eight people. But it's not about me, it's not about John Whitmire, and frankly, the people of Houston would be at a disservice if the campaign was about that. The campaign is about the city of Houston, and how to make the lives better for our neighbors."