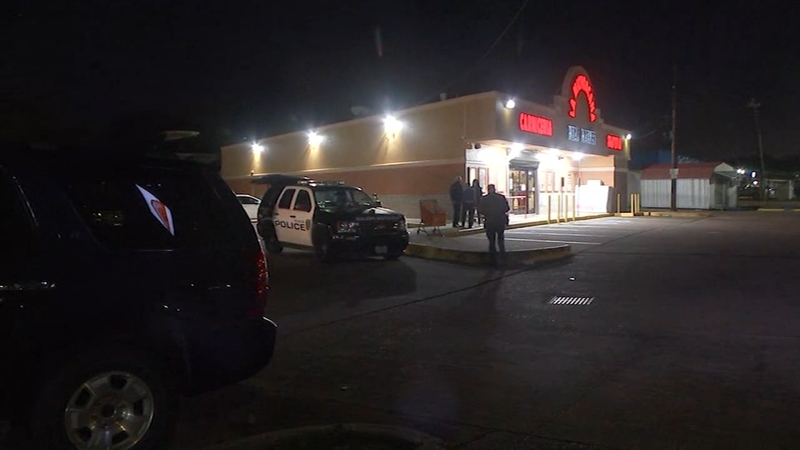 HOUSTON, Texas (KTRK) -- Two teens were arrested in connection with the shooting that injured a 13-year-old boy outside of a grocery store in southwest Houston.

Thursday night, a hearing officer said the 13-year-old may be paralyzed from the shooting.

The incident happened on Feb. 8 at 4:20 p.m. in the 7500 block of Bissonnet. Police said the suspect(s) pulled up into the parking lot of a grocery store, walked up and fired multiple shots into the vehicle the teen was in.
SEE ALSO: 13-year-old shot multiple times outside grocery store in southwest Houston, police say

In the incident, as the victim and the driver of the car he was in, were trying to get to safety after the shooting, police said they struck a 14-year-old girl with their vehicle, breaking her leg. Police initially said the suspect's vehicle ran her over. The parking lot where the shooting happened is across the street from Sharpstown High School and is used as a pickup location for students after school.

In an update on Thursday, police said they arrested a 16-year-old, whose name was not disclosed because he is a minor, and 19-year-old Corey Watkins. According to police, Watkins and the 16-year-old were taken into custody on Wednesday after a brief chase in which the 16-year-old was identified as the driver.

The 16-year-old, who police identified as the shooter, was charged with aggravated assault with a deadly weapon and also faces charges of a felony for evading arrest in a motor vehicle. Watkins has been charged with being a felon in possession of a weapon and evading arrest. He was in court Thursday night where the hearing officer set his bond at $20,000 and explained her concern for the safety of the community.

"It's alleged, with his co-actor, to have essentially hunted down another person and opened fire at a place that was a school pickup, so multiple children were injured, both bullets and struck by vehicles in the mayhem created by this defendant and his co-actor," she said. "One of those children may be paralyzed as a result of the actions of him and his co-actor, while the other child has a broken leg. The prior history of violence along with allegations, in this case, are alarming."

Watkins has a prior conviction for felony theft from a person, a charge that was reduced from a robbery in 2021.