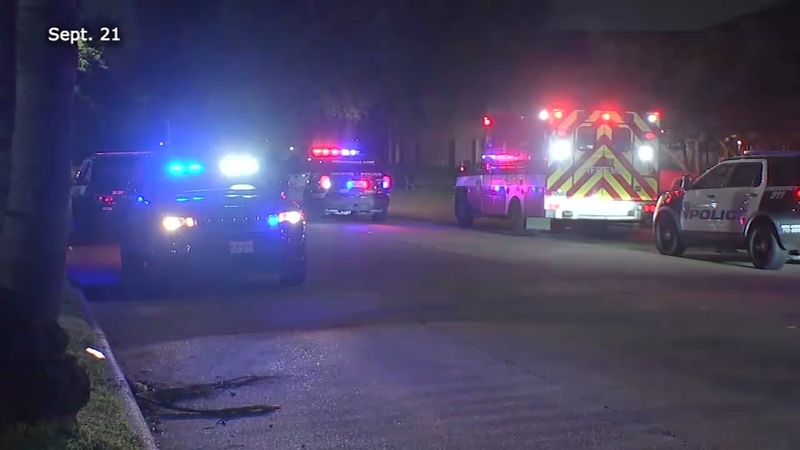 HOUSTON, Texas (KTRK) -- Numbers collected by the ABC13 data team show nearly half of Houstonians live in neighborhoods where the murder rate is up 20% or more compared to the average from 2019 to 2021.

The ABC13 data team also took a look at what kinds of places murders happen most often in Houston. These numbers are based on the places Houston police officers marked as the type of location where each incident was believed to take place.

The most commonplace for murders to happen is in homes and apartments. The second most common kind of place is highways, roads, streets and alleys. The number of homicides happening on Houston roads doubled from 2019 to 2021.

Paul Castro knows all too well the pain of losing someone due to violence on Houston roadways.

On July 6, 2021, the Castros' lives changed forever. Castro's 17-year-old son David was killed in a road rage shooting while leaving an Astros game.

"Every single time I hear a song that David liked, it hurts. Every time I look in the pantry and see something that he used to like to eat, it hurts," said Castro.

Parking lots and garages ranked the third most common places.

"Does it surprise me? No, that number has gone up. I see it. I am hearing it from the people who speak with me," said Castro.

Castro is now dedicated to seeing change, saying it starts with conversations at home and consequences.

"I think the big thing is people think they can get away with it and what our community needs to do is hold those people accountable when they are caught and turn those people in," said Castro.

He said he would like to see more HPD officers on the streets. Above all else, he wants change so there aren't more people in his shoes.

"I want to be the last among the list of people who suffer this kind of loss. It's going to take all 4 million of us in the greater Houston area to come together and say 'basta'- it's enough. We need to stop this," said Castro.

The ABC13 data group is also taking a closer look at Houston homicides neighborhood by neighborhood. We spoke to people who live in southeast Houston, just off the Gulf Freeway, which is one of the areas that is experiencing an increase in crime.

A woman ABC13 spoke with on Wednesday said she has lived in the neighborhood for about six years but is starting to look for somewhere safer.

"Definitely like on our neighborhood app, I get notifications of break-ins and people stealing, vandalizing, and also some gun activity, people firing their guns or like actually drive-by shooting," said Dana Luna.

Luna said she has noticed more crime happening in her Santa Rosa neighborhood in the last couple of years.

The data collected shows these neighborhoods including Santa Rosa, Glenbrook Valley, Garden Villas and Fairlawn just off the Gulf Freeway have experienced a 34% increase in the number of murders in the past year compared to the three-year average in this area.

"I feel like it's steady. I know a few weeks back here, at this park, there was actually a shooting here," said Edgar Nieto, who has lived in the area for 15 years.

Nieto said he has not noticed the increase in crime in this area, but does want more to be done so his sons have a safe place to grow up.

"If you are a criminal, you kill somebody, you need to stay in jail, you don't need to come out at all. That's where repeated crime starts," said Nieto.