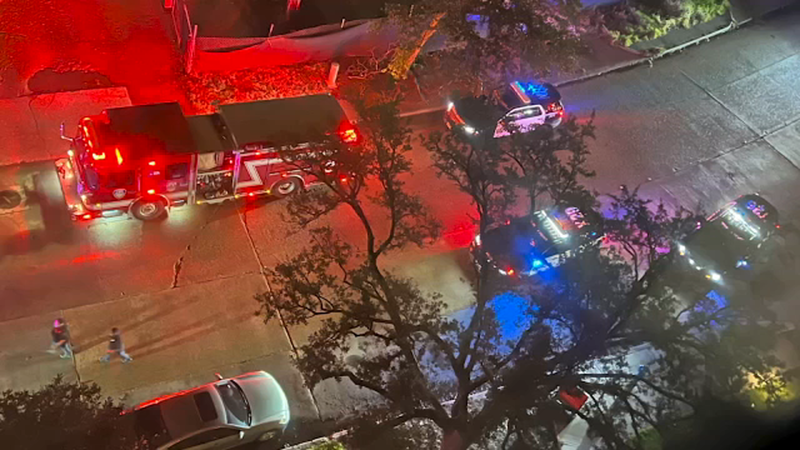 HOUSTON, Texas (KTRK) -- Two young men are recovering in the hospital after they were ambushed in front of the Crimson, one of Houston's most expensive apartment buildings.

"I heard the shots," said Natalie Carlson, who lives in the building and captured pictures of the shooting from her window. "I looked down, got binoculars out, and it was like a whole crime scene assembled."

The shooting took place at about 4:50 a.m. Jan. 9 in the 2220 Westcreek Lane. Officers found 20-year-old Devin Dunbar and 25-year-old Darrius Davis inside their Mercedes, parked in front of the Crimson. Both had multiple gunshot wounds.

"I don't know why anyone would do that," said Davis' brother.

Davis' brother confirmed to ABC13 that a group of friends went out to The Perfect 10, a club along the Richmond Strip, on Saturday night. He is unsure why the two young men ended up parked in front of the Crimson.

"I was awakened at 5 a.m. with what sounded like a semi-automatic rifle," said John Nguyen, another resident. "There were at least 30 rounds."

Witnesses said they saw the suspect leave in a white or silver sedan.

"I heard machine-gun sound, maybe 30 bullets going on," said, Maggie Gabadadze, another resident. "My mom and I were sleeping and one second (later) were standing looking out of the window."

Gabadadze said she rented from the Crimson even though she thought the apartment was overpriced, specifically to feel secure. According to the apartment's website, current available units range from $5,400 a month for a one-bedroom apartment, to more than $8,000 for a two-bedroom penthouse.

"You think you're safe. You're in a high-dollar area. You got great neighbors. We pay high dollars to be here, you don't expect to wake up to the sound of machine guns. It's quite shocking," said Carlson, who also moved to the complex for the feeling of security.

Stray bullets from the ambush shattered multiple windows on at least three units of the complex. Miraculously, nobody lived in those units, so nobody else was hurt.

The Crimson did not issue an official statement to ABC13, but an email to residents reviewed by Eyewitness News shows the complex emphasized to the residents that the shooting happened on a public street, and not on the complex property.

Davis' brother said he feels lucky that his brother is still alive, and is hoping that Houston police can track down the suspects soon.