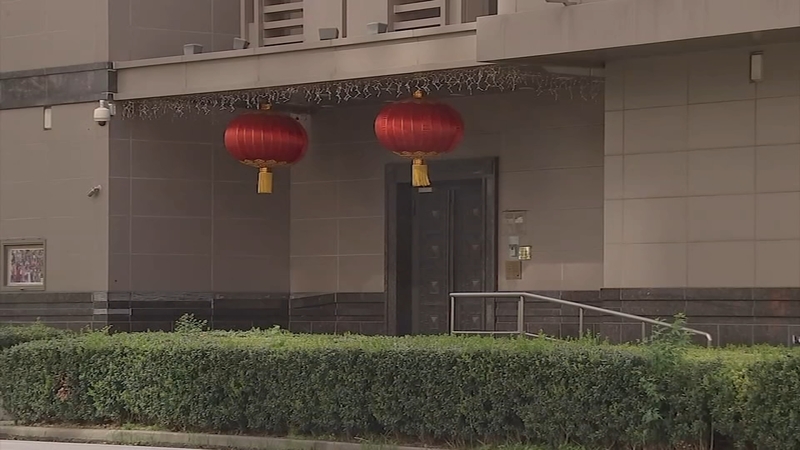 HOUSTON, Texas (KTRK) -- After 40 years of operating in Houston, sandwiched between a neighborhood bar and the busy Montrose Blvd., the Chinese Consulate closed Friday afternoon at 4 p.m.

The closure caps off a stunning turn of events that focused international attention on the consulate in the heart of Houston.

Friday morning, dozens of protesters from the Falun Gong religious group protested outside the consulate, declaring a victory of sorts over the closure.

By Friday afternoon, the Chinese staff was gone, and plain clothed federal officials could be seen attempting to enter the building. A local locksmith was hired to gain entry.

RELATED: China tells US to close consulate in Chengdu in growing spat

It is the coda to a week of international activity that's moved at lightning speed. Tuesday afternoon, neighbors noticed a small fire inside the compound. Turns out, consulate staff was burning documents, a standard practice whenever diplomats leave a posting, according to experts.

Wednesday morning, the State Dept. and Secretary of State Mike Pompeo issued several statements alleging that the consulate in Houston was a beehive of nefarious spying activity.

That afternoon, ABC13 spoke exclusively with the Consul General of the mission, Cai Wei. Cai said he was shocked and angry at the closing, and challenged the U.S. government to produce any evidence of alleged spying.

On Friday, the day of closure, the U.S. said in a brief statement that the consulate was ordered to close "to protect American intellectual property and Americans' private information."

"It's almost if Houston is being made into a scapegoat," said former Houston City Council Member Gordon Quan, who worried about the deterioration of years of economic ties Houston businesses worked to forge. "Once these ties are closed, how do we re-establish them? China's such a close trading partner with Houston, and Texas!"

But others, including members of the Fa Long Gong religious organization, saw the closure as a victory. About 30 people spent part of the morning protesting and celebrating.

One protester, who would only call himself "American Cowboy" because he didn't want the Communist Party to know his true identity, boasted that the U.S. would help him build a new Chinese government. "We come here to celebrate the eviction of (Chinese Communist Party) CCP, they will be evicted as of 4 o'clock this afternoon," the Cowboy said cheerfully.

Consulate staff reached by ABC13 on Friday said they had no idea how long they will stay in the country. "It's frustrating," one staffer shared over the phone as sounds of moving could be heard in the background.

In response to the closure, China has officially ordered the U.S. to close its consulate in the southwestern city of Chengdu.

"On the morning of July 24, 2020, the Ministry of Foreign Affairs of China notified the U.S. Embassy in China that China has decided to revoke the permission for the establishment and operation of the U.S. Consulate General in Chengdu and put forward specific requirements for the Consulate General to stop all business and activities," the Chinese Foreign Ministry said in a statement on Friday.

The Chinese Consulate in Houston was opened in 1979.