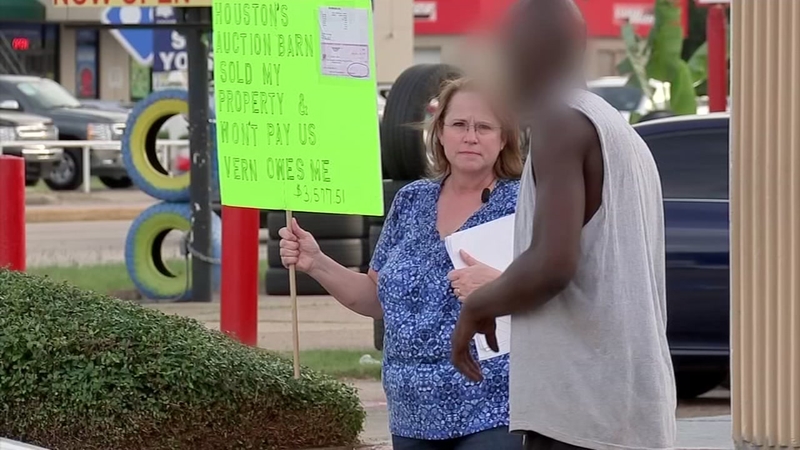 HOUSTON (KTRK) -- Every Friday the sign is out at Houston's Auction Barn on the northwest side, and every Friday, Sam Kiser and his wife Carmen are here picketing.

"We have every right to picket. I'm not doing anything illegal," his wife Carmen added.

The Kiser's claim Houston's Auction Barn owes them more than $3,500 from an estate sale on May 9th. They say they agreed to the 35 percent commission but claim they are still waiting for their share.

"He kept giving me all these excuses," Carmen said.

She says after emails and phone calls what they did receive is an unsigned check for $3,577.51. She says the owner of the auction house, Vern Wallace, told them the check being unsigned was an oversight.

"We have pretty much resigned ourselves to the fact he's never going to pay us."

The Kiser's say once they started sharing their story on social media, other clients came forward claiming they too were waiting for their money.

As Diane Dionne sews more gowns for her "Angel Gowns by Diane" non-profit organization, she says she is still waiting for one last check from a charity auction held earlier this year.

"We struggle month by month, if we have many more families this month we're going to have to say no we can't help them," Dionne said.

Dionne received two checks in June for $779 and $500 but Wallace acknowledged in an email to Eyewitness News he still owed her $895.85. He says he mailed it, she says she's never received it.

The Better Business Bureau has given Houston's Auction Barn an "F" rating, citing eight complaints against the business. Documents obtained by Eyewitness News from the Texas Department of Licensing and Regulation, which issues auctioneer licenses, show 24 complaints against Houston's Auction Barn since May of 2015. The department tells us 16 remain open.

Wallace said in an email to Eyewitness News he disputes the number of complaints the state says have been made against Houston's Auction Barn.

"We are in contact with TDLR regarding any and all complaints. We have answered and filed appropriate paperwork as required," Wallace said.

When we stopped at the auction house in person, he acknowledged some problems.

"We have dropped the ball on a couple of things. We're not perfect."

The auction house owner claims some customers who have filed complaints with the BBB or state believe their items were worth more than they sold for.

We asked Wallace, "Can you tell us why they aren't getting paid?" His response was, "They are getting paid, I'm sending out checks right now."

When we asked why it's taking so long for some clients to receive payment Wallace responded with, "We have had a couple of issues, we went with a different computer system and it's different than when we were doing hand-held tickets."

Wallace said he didn't know the Kiser's check wasn't signed but when we asked if he would walk out the door and sign it then he said they would have to go through arbitration per the contract.

The Kiser's say in their case the amount they are owed is all on this invoice.

"My goal is to warn others," Carmen said.

They say they'll keep picketing, until they are paid.