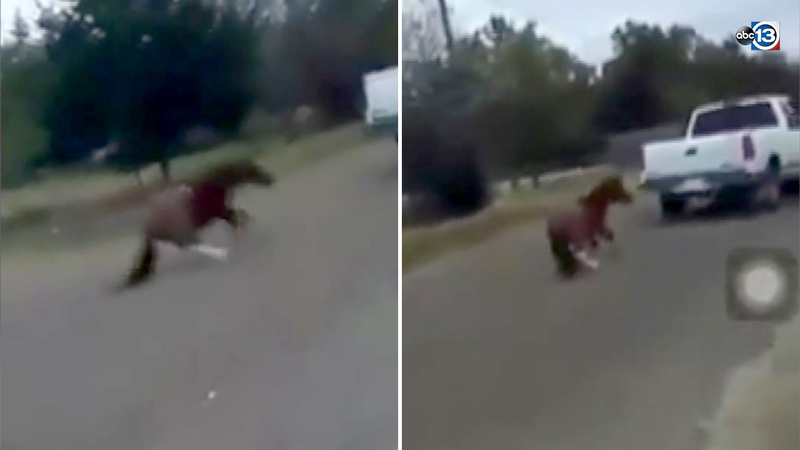 SAN LEON, Texas (KTRK) -- The Galveston County Sheriff's Office is looking for who's behind a social media video that appears to show someone dragging an animal with a truck.

The video appeared on social media Monday. A relative recorded the video and shared it with Eyewitness News.

Deputies believe the video was shot in San Leon. We showed it to neighbors, who couldn't believe what they saw.

"That's somebody's pet," Cynthia York said. "I mean, most people down here when they own horses, they're their babies. They treat them right."

Deputies were in San Leon Tuesday trying to find the people behind the video, and the animal owner.

"If it's children, or if it's young people doing that," York said. "They need to be disciplined."

In fact, deputies say they could face a misdemeanor animal cruelty charge. They believe a juvenile recorded the video.

They've spoken to his family, but they haven't been able to figure out who was driving the truck.

"It's something the sheriff's office doesn't tolerate, and we're exhausting all efforts to find out who the culprit is at this time," Galveston County Sheriff's Office, Sgt. Michael Roy said.

"It can choke, cut blood flow, air flow, and it could kill the horse," Sgt. Roy said.

Matthew Bean's family owns horses and ponies in San Leon. He said you can pull an animal to teach it how to learn, but he said, you would never do so on a paved road.

"It would be like taking sand paper to your finger nails and just grinding it down," Bean said. "Then, when you get through the layer it's going into bone and tissue."

In a place that clearly loves its livestock, San Leon neighbors want to know who would pull an animal with a truck, and post a video to social media.

"That's what I don't get," York said. "Where did you have to take that horse? If you had to drag it why were you dragging it? What was the reason for it?"