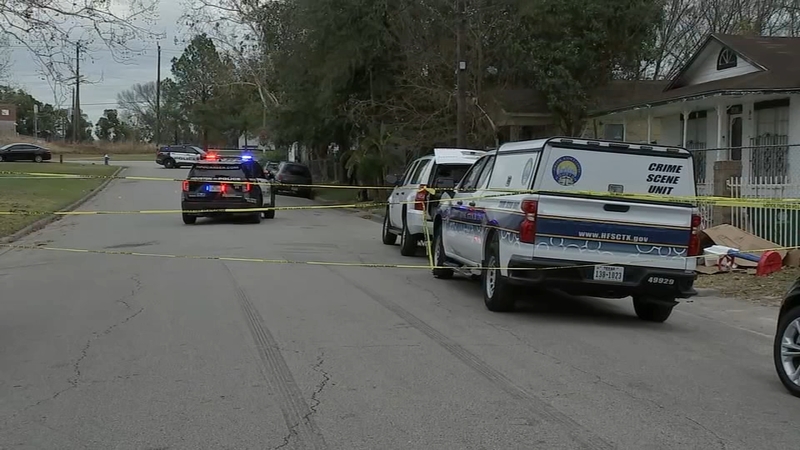 HOUSTON, Texas (KTRK) -- At least one person is dead after a home invasion injured two people and one person was assaulted in Houston's East End.

Three people were inside when several suspects barged in and opened fire.

"Between four and five suspects entered the house. They immediately got into a struggle with the residents of the house. Shots were fired. The suspects then ran off on foot," Detective Stark with HPD said.

At the scene, officers said two of the men had been shot and one was assaulted. All three were taken to a hospital, where one of the victims was later pronounced dead.

Eastside officers are on a shooting at 7100 Avenue Q. Two males were transported to an area hospital. #hounews CC9

One of the men involved was treated and released with non-life-threatening injuries.

One of the victims was actually able to return fire, police said. It's unclear if any of the suspects were shot.

ABC13 crews saw officers putting evidence markers by at least 10 shell casings at the scene. Police said the shell casings were from the suspects' weapons.
Family told ABC13 they were able to look inside the home, where they saw a gruesome scene.

ABC13's Nick Natario spoke to the son of one of the shooting victims.

"I just woke up. I was going to school, and my mom told me that something happened to my dad," Xavier Alvarado said. "I don't want to believe it."

HEARTBREAKING: Xavier's father was shot in an early morning home invasion. @houstonpolice said he's in critical condition. The suspects got away. Xavier's praying for a miracle his dad pulls through. The latest on @abc13houston at 11am: https://t.co/rzOrVGnbyg pic.twitter.com/DP7elzaQjO

Now, the search is on for the gunmen. Investigators did not have a description of the suspects, but did say they were wearing masks.

Neighbors told police they didn't recognize them.
Alvarado said he isn't sure who would hurt his father, but he hopes police can make an arrest.

If you have any information, you're asked to call Houston police or CrimeStoppers at 713-222-TIPS.

NEW DETAILS: @houstonpolice confirm two males are in critical condition following a home invasion. One shot in the head, the other in the chest. A 3rd male was assaulted. No arrests. I’m live on @abc13houston at 630am with how family described the scene inside the home. pic.twitter.com/4gfN0Uitc3