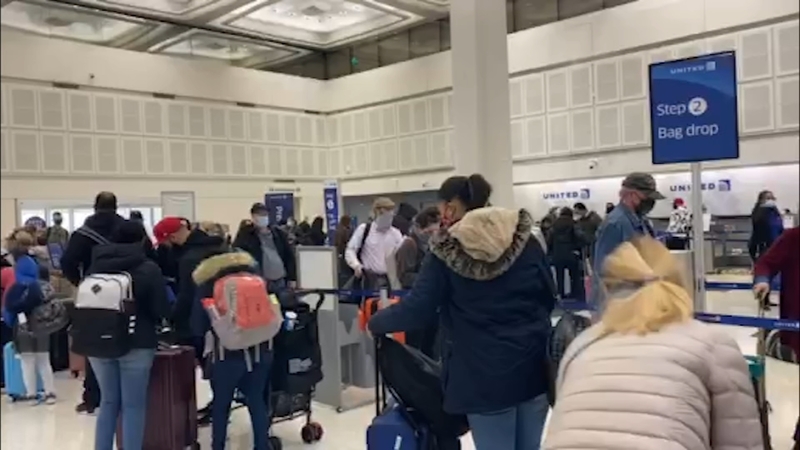 Health experts in the U.S. urged Americans to spend the holidays at home to help curb the spread of COVID-19. However, millions of people still used air travel to reach another destination this season.

As people head home this weekend after wrapping up New Year and Christmas celebrations, the Transportation Security Administration (TSA) is releasing new data on how many people they recorded at airports across the country.

More than 14 million people passed through their checkpoints since Friday, Dec. 18, according to data collected by ABC News. That number is less than how many people traveled during the same time period last year - more than 33 million.

On Saturday alone, the TSA screened 1,192,881 people. In Houston, long lines of masked travelers were seen crammed together waiting to check in at Terminal B at Bush Intercontinental Airport on Saturday morning.

The Houston Airport System told ABC13 they project 1.68 million people will have flown through both Bush and Hobby in a 17-day period from Dec. 18 to Jan. 3. This holiday season's number is slightly more than half of the amount of people who flew last year - nearly 3 million travelers.

According to TSA, Sunday, Jan. 3 could be the busiest day for air travel since the pandemic started.

The high number of travelers and the presence of wintry conditions in some parts of the country are severely impacting flight times. Chicago O'Hare is seeing the biggest impact from the winter storm moving across the country. More than 1,000 flights in the country were cancelled just on Saturday, and almost 5,000 flights were delayed in the U.S, according to Flight Aware.