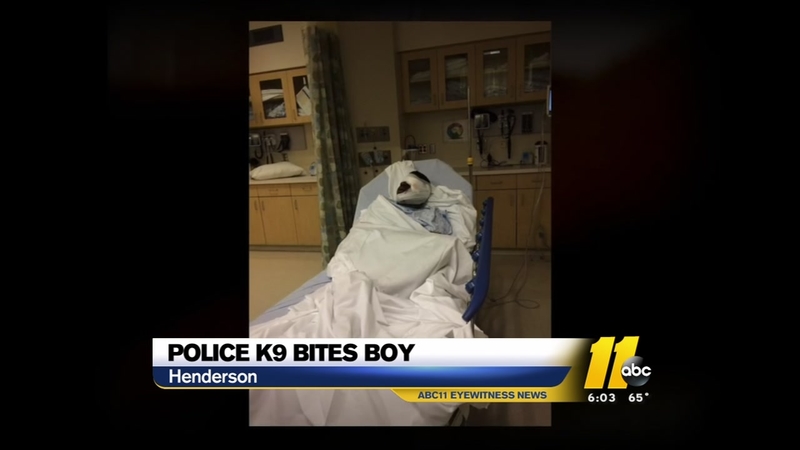 HENDERSON, North Carolina -- A Henderson teen with disabilities is in the hospital after his family says a police dog bit him.

"He only can speak so much, like 'this hurts, this hurts' or 'this is bleeding,'" Antoinette Smith, the teen's grandmother said.

The injuries come after the family called police to help find the boy.

In a statement, Henderson police said they responded to a call of a missing 13-year-old around 10:30 Tuesday night.

Coming up on @ABC11_WTVD at 5 and 6 - A grandmother in Henderson says her grandson was bit on his face and legs by a police K9, after she called authorities to help find him pic.twitter.com/UrpjdFFFJC

Police say the teen's grandmother told them her grandson had left the house after becoming upset over a video game.

She said that the teen is on the autism spectrum and has ADHD, and needed medication within the hour, adding he could fall asleep if he didn't get it soon. In response, the department deployed its K-9 unit to try to track the teen down. After smelling a pillow to get his scent, the K-9 and handler began searching the area for the teen. They soon found him about 30 feet from the home in a thorn brush thicket.
The statement from police said the teen received injuries from the K-9 and vegetation he was found hiding in.

Smith said her grandson received five stitches on each leg and was set to undergo surgery Wednesday evening on his face.

"That scar will always be a reminder," Smith said.

"The injuries were unfortunate," police said, "but we are extremely relieved that he was located and returned to his loving family."
The severity of the injury to his face - around his eye - is not known at this time.

After being taken to the hospital, Smith said Henderson police officers stopped by to visit and drop off a gift bag.

She noted that her grandson is familiar and comfortable around animals.