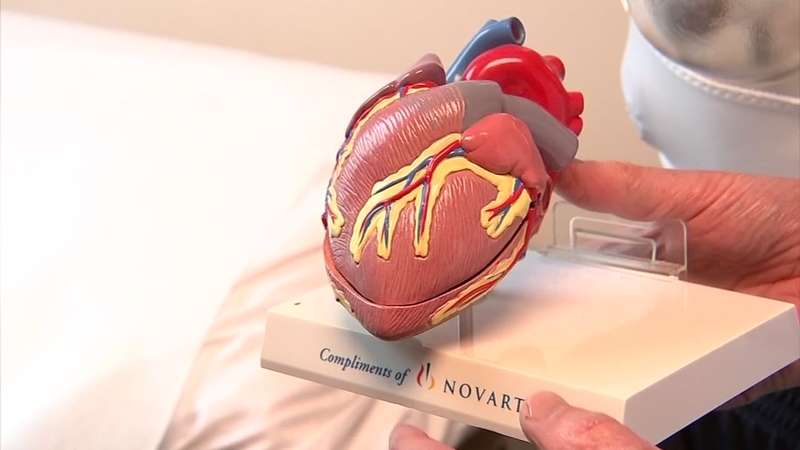 HOUSTON, Texas (KTRK) -- A heart attack can be scary, and often deadly.

The Center for Disease Control and Prevention said every year nearly 500,000 people experience "sudden cardiac death" after a heart attack or in the days right after.

Now a new, wearable device is helping to lower the risk of this deadly condition.

For James Stone, his heart journey started back in November.

"I came home on Friday not feeling 100 percent. It turns out the kids were sick," said Stone.

Stone thought since his triplet 7-year-olds were sick, he must have had a stomach virus that wouldn't quit.

By Sunday, Stone decided to go to the emergency room. When he arrived, doctors rushed him to a room.

SEE ALSO: Revolutionary medical device sucks the cough out of you

It turned out Stone has coronary artery disease.

"As a result, he had a lot of damage to his heart muscle, which led to a decrease in his heart to pump blood and also exposed him to the risk of abnormal heart rhythms, and this can cause sudden death," explained Dr. Charles Caplan, a cardiologist affiliated with the Memorial Hermann Medical Group.

Stone had a stent put in, but before leaving the hospital, Dr. Caplan prescribed something a little different -- something other than a medication.

"We recommend a LifeVest, which is a device that can monitor a rhythm, detect a life-threatening arrhythmia, and deliver an electrical charge which restores a normal rhythm," Dr. Caplan explained.

"The vest enabled me to go home, play with the kids, go fishing, and enjoy life," explained Stone.

A week later, when Stone was home alone, the following happened.

"I was lying in bed watching a movie. I felt this strangeness come over my body," Stone said.

Stone passed out, and during that time, the LifeVest gave him two electrical charge treatments, saving his life.

And being here for his wife Pam and their triplets is exactly where Stone wants to be.

"Had he not had that vest on, there is no doubt in my mind that I would be a widow, and my kids would be fatherless," said Pam.

Stone had a pacemaker put in after that LifeVest saved him and he's now doing well and enjoying life with his family.